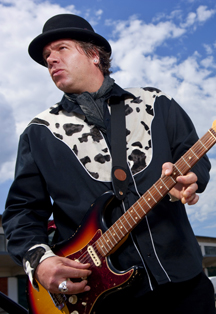 Jason Buie's six string manipulation is stunning and magical and his passion, honesty and charisma shine in his live shows. Jason's modern electric blues in seasoned funk, rock and soul with influences that originate in the Southern States and inner cities of America.
No audio samples have been linked to this profile.

Status: Unknown
- Last confirmed Aug. 5, 2009
Submit info on this band to our admins