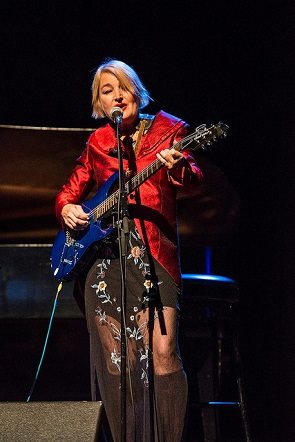 Iconic and enigmatic Jane Siberry is one of the world's most unique and gifted singer-songwriters.

Blessed with a sincere integrity and emotional depth, her work has spanned 3 decades, with the release of 14 studio albums and performances on concert stages around the world.

Her 1985 album The Speckless Sky was a huge critical and commercial success and the follow up albums The Walking, Bound By Beauty, When I Was A Boy and her signature song 'Calling All Angels' cemented her status as one of the world's foremost performance artists.

A Canadian native, Jane's songs have been covered by numerous artists, with particular success by K.D. Lang on her renditions of 'Love is Everything' (which featured on the soundtrack of Wim Wenders film Until The End Of The World), 'Haint It Funny' and a stunning rendering of 'The Valley'.

Jane has also collaborated with Brian Eno, Nigel Kennedy, Peter Gabriel and The Indigo Girls and contributed the track 'It Can't Rain All The Time' to the film soundtrack of The Crow (which starred Brandon Lee). Jane's songs have been featured on the Soundtracks of Atom Egoyan's film The Sweet Hereafter as well as the 2000 film Pay it Forward.

She also contributed the track 'When I Think Of Laura Nyro' to the Time and Love album, which celebrated Laura's music with the likes of Suzanne Vega. Love Is Everything is the Anthology of her collected albums. Jane is set to release her next album in the New Year.

Jane is on a tour involving 5 residencies in the USA in November and December (New York City, LA, Seattle, Portland and San Francisco) with a few special salons along the way, including one in Victoria at a house in Fairfield. This is guaranteed to be a very special evening with Jane performing with Rebecca Jenkins and Ali Hughes. Rebecca Jenkins is a celebrated canadian actor and singer, having starred in several CBC and NBC miniseries. She played Sarah Polley's mother in the documentary film Stories We Tell. Jenkins has been a backup singer for Jane Siberry and The Parachute Club.
No audio samples have been linked to this profile.