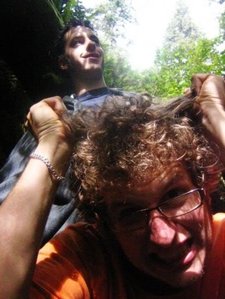 This all started at Sombrio Beach. A young man named Taryn Zotzman just happened to run into one Bobby Aarsen, the two cyphered, beat boxed, spoke poetry and jammed on an old acoustic guitar and Djembe until the sun rose. The next day they began a journey, melded minds, looked past each others flaws and found a kinship stronger than brotherhood. After working with Curtis Paddle the 3 then formed a group known as Konques. Together they stole beats from 9th wonder and Alchemist and began to scribble thoughts on paper. After a few months it became like work, always at each other backs to get this done, or make that sound better, after playing a few house parties, they realized it was time to make a decision. The time came for their first real show, an 8 minute set at Bar Code, opening for Guy Woods, Apos and Beer Money Entertainment. On the stage there was an eruption of emotion, Curtis played the fool and his towel was thrown in. Now separated the 3 became 2 once more. Taryn shadowed himself in a character known as Over I, and found a flow only compared to "jumping on a pogo stick at a house party he wasn't invited to in the first place". Bobby, not realizing Bobby Aarsen was such a sick ass name, took to the name illegitimate right out of his freestyles. Came off the top of his head so much it just felt right. Illegitimate and Over I met with Aleph 1ne, who gave them an opportunity to create and what came out was much more than the 3 of them ever expected... IllanI. Aleph introduced the 2 to some cats known as Sin and Esque. Now powered by beats from Esque, and Aleph 1ne the 2 had almost everything they needed to make good Hip-Hop. They made songs, Played up and down the island with Beer Money Entertainment, but something was missing the sound, the backbone, the beatmaker and DJ. One day Bobby decided to pick up a Tech 1200 n give it a go, he now houses 2 and a rapidly growing record collection. Quickly he learned to cut, stab, scribble and scratch, and a new layer arose from his hands. Taryn, then picked up an old 202 drum machine and a SP-555 and began to dig through the crates. He soon found the sounds and samples the songs had been missing, he padded until the rubber was stuck under his fingernails and his brain was mush from the repeated sounds he was perfecting. The two are now stronger than ever and always growing, watch out, there gunna be visiting you any day now...

Read more: http://www.myspace.com/illanilive#ixzz0yYAgr7Lw
No audio samples have been linked to this profile.
No member roster has been entered (to link to musician profiles.)
Status: Unknown
- Last confirmed Sep. 4, 2010
Submit info on this band to our admins