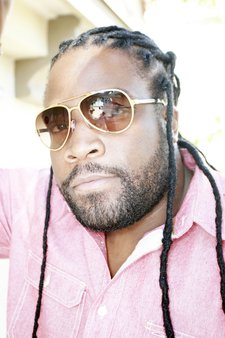 Roy Morgan, a member of the internationally renowned reggae group, Morgan Heritage, was born in Brooklyn, New York and raised in Springfield, Massachusetts with his parents and 29 other siblings. Gramps is one of the legendary Denroy Morgan’s seventeen sons and was affectionately given the name “Grampa” on the day of his birth by an aunt who noticed his uncanny resemblance to his grandfather. The name, “Gramps”, would follow him throughout childhood into adulthood and is also used as his stage name. He became a member of the family band Morgan Heritage, at the tender age of nine. Morgan Heritage has recorded over twenty albums spanning many hits including the all time favorites “Down By The River”, “Don’t Haffi Dread” and “I’m Coming Home”, to mention but a few. They have sold millions of records and continue to gain fans all over the world. Denroy Morgan had prophesied that one day, each of the group members would trod on their own journey to achieve solo stardom. After more than a decade of touring and performing with Morgan Heritage, Gramps is now reveling in the success of his long foreseen solo career.

An experienced vocalist, keyboard player and performer, Gramps released his first official single as a solo artist, “Wash The Tears”, under his own Dada Son Entertainment label. Following the success of “Wash the Tears”, Gramps debuted his first solo album, Two Sides of My Heart - Vol. 1 in 2009. Gramps set out on tour with several major musical artists to introduce himself as a solo artist and meet his fans. He performed on the highly successful Evolver tour with John Legend and India Arie and also performed during India Arie’s Soulbird tour. He continued to tour with Tarrus Riley, his brother Peetah Morgan and was the opening act for his longtime friend, Buju Banton on the Rasta Got Soul tour.

Written, composed and produced by Gramps, “Wash The Tears” entered Italy’s Top 20 Singles Chart at number eight. The album spawned multiple hit singles, which earned Gramps three awards for Best New Entertainer, Best Song (“Wash The Tears”) and Best Crossover Song (“Therapy” featuring India Arie) at the 2010 International Reggae and World Music Awards. He also earned a nomination for Reggae Artist of the Year at the 2010 Soul Train Music Awards and went on to win Album of the Year at the 6th Annual Excellence in Music and Entertainment Awards. Gramps’ work and collaboration with reggae superstar Buju Banton on his album Before the Dawn would set the wheels in motion for his greatest accomplishment to date; At the 2011 Grammy Awards, Before the Dawn won the award for Best Reggae Album, which lists Gramps as co-producer, lead vocalist and writer for the track “Try Life”.

Gramps is currently recording his second studio album, which is presently untitled and scheduled to be released sometime in 2011. He plans to release Two Sides of My Heart - Volume 2 in 2012, which will be an R&B and country inspired album. To further showcase his musical versatility, Gramps is also working on a techno/dance infused album. In addition to the recordings, Gramps is also scheduled to embark on a US summer tour in 2011 and has plans to follow it up with a European tour alongside his brother, Peetah Morgan. Regarding his upcoming projects, Gramps says, “We don’t want to be predictable in the music; we want to keep it interesting and we want to keep it fun as well.”


Passionate about helping others in need, Gramps established the charity Music Orchestrating Miracles (MOM), to help bring relief to the needy in various parts of the world. In Africa, MOM works in conjunction with various medical organizations to provide mosquito nets, Malaria medication, HIV test kits and water purification tablets amongst other resources in remote areas. The organization was also part of various benefit concerts aimed at collecting funds and resources for the people of Haiti and most recently Japan. MOM has been operating since early 2010 and continues to make strides in helping to alienate human suffering due to poverty, diseases and natural catastrophes.


Now that he is settling into the success and solo stardom of which his father dreamed, Gramps says, “I just want to give people new music and let people know that everything is going to be alright. I want to reason with my fans and get personal with them because everyone has problems. My music is about healing, heart to heart. This has always been my father’s plan; we are all on an individual journey to express ourselves musically”.

Add / Link Article
No member roster has been entered (to link to musician profiles.)
Status: Unknown
- Last confirmed Apr. 18, 2011
Submit info on this band to our admins