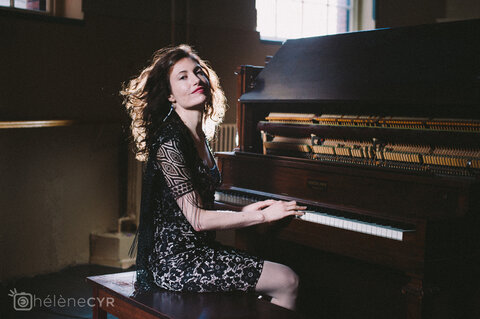 Glenna Garramone is a singer-songwriter and multi-instrumentalist based in Victoria, BC, Canada, equally at home as a solo artist and in collaboration with a wide range of performers. 2016 highlights include mainstage performances at Telluride Bluegrass Festival, the Vancouver Folk Festival, and Rifflandia, as a member of the band Shane Koyczan and the Short Story Long, with whom she co-wrote for their most recent album, Debris (featuring guest Ani DiFranco).

2014 highlights included performing at the Calgary Folk Music Festival, as a harmony vocalist with Juno nominee Oliver Swain's band Big Machine, and at the Shaw Amphitheatre at The Banff Centre as a member of Shane Koyczan and the Short Story Long, where the band shared the stage with Polaris Prize winner Tanya Tagaq.

With a style somewhere between Keith Jarrett and Joni Mitchell, Glenna Garramone's songwriting earned her Grand prize in the Artswells Songwriting Contest in 2010, and the award-winning song "Bear Scat" was featured on CBC Radio's North By Northwest with Sheryl MacKay. Inspired by the geography, inhabitants, and spirit of the places she has lived, from Nunavut to Hawaii, Glenna Garramone crafts "raw, emotional, and utterly captivating" songs (John Threlfall, Monday Magazine), using anything from piano, to guitar, to her tap shoes.

Her fusion of talent, creativity, and craft have won Garramone invitations to a wide variety of venues; from the main stage of Victoria's Folk Fest, to the BC Festival of the Arts, and the Victoria Independent Music Awards. Her studio debut, Seasky-Starsong, charted at #2 on the folk charts in Victoria, BC. Recorded in a solar-powered yurt on Molokai'i, Hawaii, her latest album, Thank You Half Moon captures the intimacy and warmth of Garramone's live performances. In 2012 and 2013, Glenna Garramone was an official onboard entertainer with Via Rail on trains between Vancouver and Halifax. In 2004 she was invited to tour the West Coast of the USA between Seattle and L.A., adding a musical and tap dancing element to The Perpetual Motion Roadshow, in which she played and sang original songs.

Glenna Garramone is the producer and founding member of the Leonard Cohen tribute group Tower of Song, which she performs in collaboration with Oliver Swain. Tower of Song toured nationally, playing over 90 shows in theatres and folk clubs in support of their debut album, In City and In Forest (which officially released in April 2014), produced by Juno award winner Joby Baker. In addition to re-imagining the works of Cohen, Tower of Song includes original songs as part of their live show and recordings. Performance highlights include packed houses at the West End Cultural Centre in Winnipeg, and The Rogue Folk Club in Vancouver, Hugh's Room in Toronto, and receiving 3 standing ovation encores at the ArtsWells Festival.

Glenna holds a BFA in Writing from the University of Victoria, with a major in Poetry. In 2011 she graduated from the Community Choir Leadership Training Program, which prepared her to guide others in singing together, and to "embody the idea that singing is our birthright." When she's not on the road, Glenna resides in Victoria, where she facilitates, directs, and arranges songs for a non-auditioned indie-pop-rock choir, The Pandora Chorus.