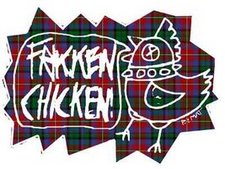 Punk with a twist from Victoria BC
Unknown - Confirmed: Feb. 26, 2009 (Awaiting Update)

Jared Norman
frikkenchicken@gmail.com
Contact Info
Past Shows (1)
I'd have to describe us as a punk, but, informed punk, but also satire, and at the same time punk. Well not usually at the same time. We play a variety of punk, satire and misc. songs and, are great fun to watch. The sample down there seems to freak out and play really fast when you hit play, so download that one and it works, we know you want to keep it anyway.

We formed originally as a joke and never planned to actually become a band. A few days later it had spawned into a real band. It was finalized when we presented Nardwuar with our band's t-shirt.

We are pretty adventurous when it comes to playing music, we do alot of improvisation, no song is the same the second time we played it... even if we did just play it 5 minutes ago, or 2, or if it ended thirty seconds ago. Allways highly energetic, exciting and hilarious.
No audio samples have been linked to this profile.