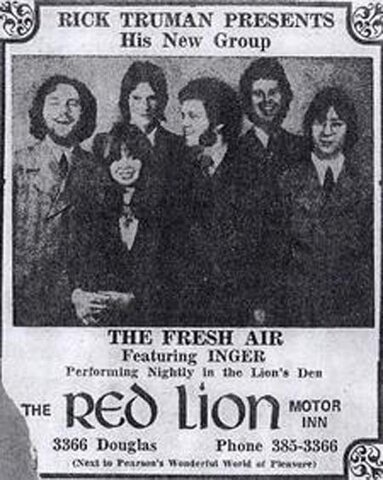 from Victoria BC
Broken Up - Confirmed: Jan. 23, 2021 (Archived)
This band was formed from the ruins of Moxie in 1971 or so. The original drummer was Ron Flatman, but he was later replaced by Jerry Adolphe. Bob Verge, the bass player, walked off the stage, taking his guitar with him, in the middle of a set. Luckily, both Morry Stearnes and Rick Truman could play bass, so we just carried on without him. We were a strong vocal band with Inger, Rick and Morry all on lead vocals. We lost Norm MacPherson briefly to Skylark then stationed in Florida. However he returned to good old Victoria. The band folded when Rick and Inger Truman quit and Rick started a career in radio sales (CFAX) and later in advertising (Truman/Glover, Truman/Palmer Jarvis of Victoria and later Palmer Jarvis of Vancouver.

Inger's last name was actually Heggelund, and she then Married Rick Truman in 71. They then divorced in 91 and Inger remarried. Her name is now Inger O'hanlon. Rick Truman passed away on August 19th 2007 in Vancouver BC.

Fresh Air was a great band with a strong lineup of players. I knew everyone but the bass player and worked with most of them. I am the Glover in Truman/Glover Advertising and my partner Rick Truman put the same energy into his advertising work as he did with his band. I knew these guys would not stay together for long. They were too good and needed to be in a major market like LA not just the house band at the Red Lion Inn. I am saddened today to learn of the passing of my dear old friend and partner, Rick Truman.
No audio samples have been linked to this profile.

Status: Broken Up
- Last confirmed Jan. 23, 2021
Submit info on this band to our admins