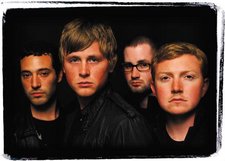 Having formed in 2005 and released their self-titled EP in 2006, Elias has performed countless club and all-ages shows across Western Canada. In doing so, they garnered praise from the media and caught the attention of Canada’s largest booking agency, Sam L Feldman & Associates, who later sought out the band and added them to their talent roster.

“…they succeed in making the kind of pulsating, loud rock that the Mars Volta or Radiohead might approve of in equal turns.” – Spin.com

“Every band has particular strengths and, for these guys, it’s their vocals. Falling somewhere between Radiohead and Nada Surf, they have a great sound that they make all their own.” – Chartattack.com

Fast forward to 2008, Elias are hot on the release of their full-length debut album, All We Want. The vision for their music is deliberate and defined.

“We want to move people physically and emotionally with our music”, says Brian. “It’s our chance to inspire, tour the world, make great albums, and perform with our musical heroes.”

With the release of All We Want and an extensive tour schedule, Elias is sure to gain experience and credibility as well as further develop their fanbase.
No audio samples have been linked to this profile.

Status: Unknown
- Last confirmed Feb. 23, 2011
Submit info on this band to our admins