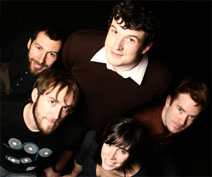 Galen Hartley
250.382.5642
Contact Info
Past Shows (34)
We were once the quietest band in Victoria, crooning and swooning in a local bookstore. We took it seriously, carefully crafting our acoustic experiments. We wrote long songs and played them at low volumes. It was paradise. Since those heady days we have increasingly incorporated more elements of pop music - like the chorus. I know! Watch out! Ham and eggs coming right at you! (Like I said, it was "paradise.") A self titled EP was released. A full length album called Monument was released! We are very excited. Listen to a song! We took a trip across Canada and played music for people we didn't know. What was it? Paradise!
No audio samples have been linked to this profile.

Status: Unknown
- Last confirmed Jan. 5, 2010
Submit info on this band to our admins