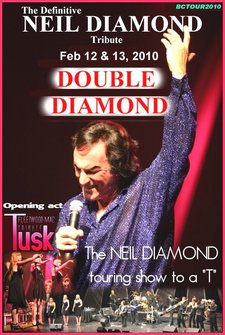 Brandy Entertainment Productions
doublediamond10@shaw.ca
(250) 479-3076
Contact Info
Past Shows (12)
Bill has been in the music business since 1960 in several bands. The Esquires - Victoria High Schools' first ever Rock & Roll band, the Azrecs, the Noblemen, Pagan Blue, and Festival. He left the B.C. Telephone Company in 1975 to pursue a professional music career and formed the popular trio - BRANDY with drummer Dennis Scherk and keyboardist Greg Schaefer. The group performed at many major B.C. bars lounges, hotels, corporate functions, and private shows for several years until Bill went into a duo act with many female vocalists. In 1986 he landed a yearly "house gig" as a solo entertainer at the Esquimalt Legion for the next 16 years where he learned how to impersonate various star characters. He produced a long running highly entertaining show with three additional impersonators - Guy Price, Bob Wareham and Brian Dorrington. Together they did a weekly show called "The Traveling Wannabes" Together they sang, dressed and acted out 120 various characters and ran for three consecutive years of "extra" entertainment on Wednesday nights. He has impersonated Louis Armstrong, Ray Charles, Little Richard, Garth Brooks, MC events as Phil Donahue. He has even impersonated in full costume and voice (get this)---------TINA TURNER!!!! and on occasion, Dolly Parton.

Out of this long running series of shows Bill discovered his best character - Neil Diamond and in 2003 he was forced to leave the Legion and assembled an 11 piece local Victoria band entitled "DOUBLE DIAMOND which now still operates under his own production company called BRANDY ENTERTAINMENT PRODUCTIONS. The group has continued to entertain to date 100,000 theatre audiences all over British Columbia with dozens of SOLD out shows. One of the past shows at the ROYAL THEATRE in Victoria March 19, 2005 Bill added a full 25 piece CHOIR! the Camosun Chorristers for a grand finale'. To date the group is reaching record theatre sales all over the province as one of the best and most entertaining "Las Vegas" style Neil Diamond Tribute shows. The group has their own opening act called "TUSK" where several of the band members perform a tribute to Fleetwood Mac to perfection. Recently this opening act has received standing ovations and encore demands for this opening act alone. Vocalists Laurie Belknap and Kathleen Zaalberg are featured as Christine McVie and Stevie Nicks of the original FM group. They look and sound exactly like the "real" stars. at now 64 Bill's musical carreer has finally taken him and his backup band to new and greater levels. On September 16, 2007, Bill was honored to in the inducted in to the musical "Hall of Fame" at Victoria's Royal City Music Project as an infuential
musician entertainer since 1960.

Check out the website at http://www.doublediamondtribute.ca
No audio samples have been linked to this profile.

Status: Available for Shows/Gigs
Active - Last confirmed Mar. 14, 2019
Submit info on this band to our admins