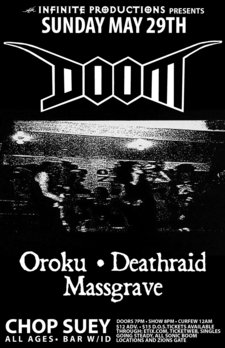 Doom are an English crust punk band from Birmingham, England, whose first, influential lineup were together from 1987 to 1990. Despite its short existence, the band is considered pivotal in the rise of crust punk, a style within the punk rock subgenre that fuses extreme metal with anarcho-punk. They recorded for Peaceville Records and are cited as an early precursor to the grindcore style of heavy metal music.
No audio samples have been linked to this profile.
No member roster has been entered (to link to musician profiles.)
Status: Unknown
- Last confirmed Feb. 26, 2011
Submit info on this band to our admins