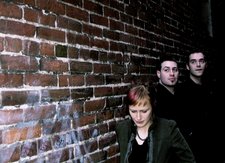 Kevin Legere
djlegere@hotmail.com
250 661-7595
Contact Info
Past Shows (15)
A certain rebirth has occurred in the development of music in the form of Victoria’s “Death to Sexy”. The genre dubbed “Punk-infused Electro” by band members Kevin Legere, Kelcy Clark and Scott Macpherson blends catchy electronic beats with distorted provocative vocals while maintaining an edgy attitude in song structure and form. Although recently signed as “Death to Sexy” with Toronto’s Bug-Eyed Records, the band, formerly “Rabbits Holding Guns”, have been creating music together since April of 2004 with the intent on creating something fresh for the music community. Currently Death to Sexy is working on a full length album that will further explore the boundaries of electronic music. Their live shows, including Victoria’s 2006 Electronic Music Festival, have built them impressive momentum within the music scene. With influences ranging from classic punk like the Dead Kennedy’s to Radiohead, Miss Kitten, Metric, and a variety of electronic genres, “Death to Sexy” has honed in on a unique sound with a performance that should not be missed. While lead singer Kelcy Clark has quickly developed both her vocal ability and powerful up-front performance, Kevin Legere, a veteran techno dj and former punk band guitarist creates and re-mixes beats with technical wiz Scott McPhearson. The groups undeniably cutting edge style, highlighted by female vocals, dirty basslines and hard dancy percussion will keep you moving all night long.
No audio samples have been linked to this profile.

Status: Unknown
- Last confirmed May. 15, 2009
Submit info on this band to our admins