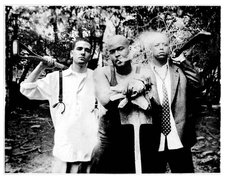 CunninLynguists are a hip hop trio from Lexington, Kentucky. The group currently consists of Deacon The Villain, Natti, and Kno. Their debut LP, Will Rap for Food, was released in October 2001. Their second LP, SouthernUnderground, was independently released April 1, 2003 on Freshchest Records.Kno, hailing from Georgia and currently residing in Atlanta, has been described as "one of the top loop-miners east of the Mississippi" by URB Magazine.Hailing from Versailles, Kentucky, Deacon The Villain is also an established producer. His beats have been used by the likes of KRS-One, King Tee, and J-Ro from Tha Liks, as well as local Kentucky artists such as Rob Jackson and Bonafide Circle.Florida-based emcee Mr. SOS was a part of CunninLynguists from July 2002 to October 2004.
No audio samples have been linked to this profile.
No member roster has been entered (to link to musician profiles.)
Status: Unknown
- Last confirmed Sep. 18, 2009
Submit info on this band to our admins