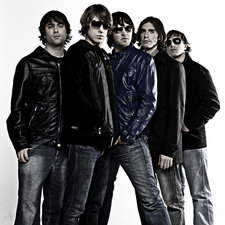 Kevin
columbia@columbiaband.com
Contact Info
Past Shows (24)
Columbia's founding members have spent the past three years devoted to creating the new universal rock. Big rock, the way it should be. With catchy licks and meaningful lyrics, Columbia combines talent and emotion. Guitarist Richard Jacquard and vocalist Kevin Schallié have crafted a band that will be heard and is sonically like no other. When Kevin and Richard first began writing music together, they promised each other that they would be the best and do anything it takes to make music that transcends all boundaries.
In the past year Owen Connell, bass, and Josh Wright, drums, have completed the sound that is Columbia. After countless auditions, Richard and Kevin found that the bandmates they were looking for were people already present in their lives. Josh, who graduated from the same high school as Kevin and Rich, kept ties with Richard through musical events. Owen played in Halogen, a band that frequently played with Kevin and Richard with their former band 'Straitpipe'.
Columbia's musical past is rich with Kevin and Richard starting the band Straitpipe in 1998 and going on to win multiple competitions. They have played all over the Lower Mainland playing such venues as City Limits, the Purple Onion, and the Media Club to name a few. Josh has been in many bands over the years including Downstroke and Joycamp. Owen has also been in multiple bands including Halogen. With this experience, Columbia has come together at the right time.
Like their favorite bands of the past, "Columbia is the best" and are ready "to prove it". THEY WILL BE HEARD.
No audio samples have been linked to this profile.

Status: Unknown
- Last confirmed Feb. 7, 2011
Submit info on this band to our admins