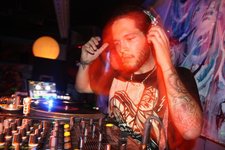 Chris 'Okibi' is an innovative and sometimes unconventional DJ, producer, and live performance artist from Victoria, BC. With an early beginning in drum and bass and dubstep, and mentoring from some of Canada’s finest, Okibi has exploded on to the broken-beat scene, opening for acts such as 12th Planet, Capital J, RCola, ill.Gates, and Soulhunter. He brings a diverse selection of beats and styles to every set. From rolling liquid funk, to dubwise exclusives, bangin’ jump up, and glitched out dubstep, Okibi utilizes everything from vinyl to MIDI controllers. In late 2006 he founded Union Sound System, a steadily growing network of avant-garde artists. Okibi stays true to the old school sound, while pioneering future vibes.