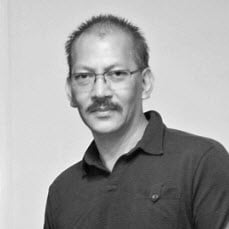 When I was 12, my grade school music teacher taught me how to play the double bass. At age 17, I switched to electric bass. I loved playing along recordings from Spyro Gyra, Chuck Mangione, Lee Ritenour and other jazz artists of the 80s. In that decade, I played with various bands with interesting names such as "Pooh-Kah-Bah", "Donut", "Blood Connection" and "Firestorm".
In the 1990s, I discovered UZEB, and Alain Caron became my new idol. I gigged with "Glimpse" and "Solitude", jammed with "Mold Colony" and played and recorded two CDs with "The Boz Roz Band". I also played many gigs with the amazing multi-instrumentalist / premier vocalist Marlon Narciso.
In 2011 I played bass at YouTube sensation Ryan Narciso's debut concert.
I am the current bass guitarist for Swingit!