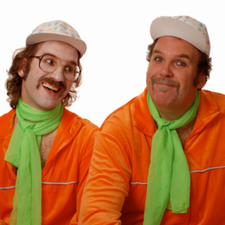 moustachedpainless@yahoo.com
Contact Info
Past Shows (31)
By fusing together elements of gum-snapping pop, electronic dance beats, and thoughtfully selected fashion, Big Hamm (Stephen Hamm of Copyright) and Lil Hamm (Robert Dayton of July Fourth Toilet) have toured the world for the last three years. From New York City to Sydney, Australia, Montreal and Los Angeles, Canned Hamm have been bringing down the house with their pointed lyrics and urban glam rump shakers.

Their first music video, “Father and Son”, hit #2 on the national music television network Musique Plus show DollaraClip and was also voted the "Best Video of 2002" by Nardwuar the Human Serviette on MuchMusic’s Going Coastal. Down under, it received medium rotation on the Australian Broadcasting Corporation’s weekly video show Fly T.V.

Throughout their illustrious career, Canned Hamm have shared the stage with such luminary acts as Canada's very own Peaches, The New Pornographers and most loyally alongside Neil Hamburger. After storming the City of Angels, the normally verbose L.A Weekly could only mumble: “(It was) something.”

Status: Unknown
- Last confirmed Apr. 19, 2013
Submit info on this band to our admins