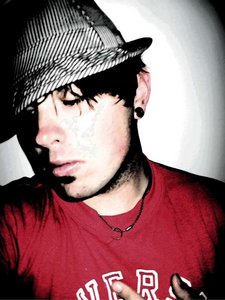 Brandon Mason is a singer/songwritter out of Victoria B.C. Born in Nanaimo B.C., he grew up obtaining musical knowledge through listening to his parents old records and cassettes and learning the different styles and genres. His late grandfather was an early influence playing guitar, among other instruments, and his oldest brother, whom which he learned rythum from on an old drum set. Between band class in highschool, and lead roles in musicals, this was definitley a passion that was only to grow. After highscool, Brandon took on more towards music. Starting up bands, promoting shows and writting original material, were just the foundation to what is becoming a promising career. After sometime, in different bands, he found himself in a five piece at the doors of "Drive Thru Records". After being signed to DTR and touring the united states, his year and a half relationship with the band had come to an end. His quest to become successfull held a different hand than the one the band was holding, which lead to the descion, this must be done alone. Now, a solo artist and out on his own, Brandon is confident that this is where he is to be, independant and hard working.