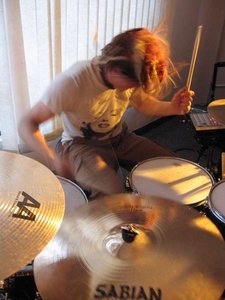 HUMMUS! Ive been playing drums for nearly 12 years and working with samplers, synths and sequencers for almost 3. I am looking at getting back into a serious recording/ touring project in Victoria, Vancouver or Nanaimo. Im into original and creative projects only. I am not a cover band drummer, and I am not into cock-rock. Here is some things I have done, and some people I have worked with over the years:::: I helped form and played drums for "Open, parachute!" (ambient/prog/pop/rock) from Nanaimo BC. Toured, recorded 3 albums, and played together for nearly 3 years. Played drums for "Shifted" (alternative/ pop-rock) from Nanaimo BC. Recorded 2 albums, toured and played together for nearly 5 years. Worked with Adam Sutherland (armchair cynics), Zakk Cohen (woodshop studios), Rick Salt (island pacific), Paul Cimolini (muse studios), Julian Bakker (muse studios) Dave Sponaugle (op), Chris Arruda (op), Ryan Steele, (op) Nathaniel Blanchard (op), James Gauthier (op), Daniel Bryant (shifted), Carl Schleppe (selfcontrol), Derek Rathy (shifted). & John Mulligan (shifted). I've also done graphic design for albums and merchandise for both of the serious bands I have been in as well as other bands in Nanaimo. I have professional and reliable gear. Taye drums, Sabian & Zildjian cymbals, & Roland electronics. I am the biggest gear-nerd you will ever meet. My main musical influences include Incubus, Radiohead, The Mars Volta, Led Zeppelin, Pink Floyd, Moneen, Sigur Ros, Thrice, Silverchair, & Tool.