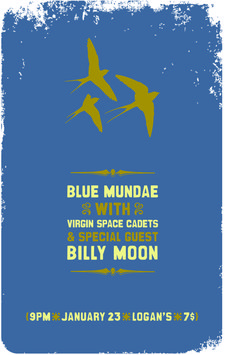 Benjamin Lubberts
bluemundae@hotmail.com
250-217-2911
Contact Info
Past Shows (46)
On the band’s debut EP, Home Stereo, the acoustic rock quartet refreshingly changes things up, often within the same song. Staying away from the generic song layout, it never sacrifices a strong melody or hook. From the djembe-and-cello laden “Our Minds Think Too Quick” to the more aggressive “Different Chapter” and near Celtic folk of “Raven Inn,” Blue Mundae’s inventiveness is just plain cool.

“All of us listen to quite a bit of Radiohead. We’re highly influenced by them, as well as older Incubus music,” says frontman Ben Lubberts, Blue Mundae’s main songwriter. “I guess, because of those influences, the whole song ties together with a common theme, but you wouldn’t guess that all the parts were from the same song.”

Produced by Warne Livesey (Midnight Oil, Matthew Good) who just relocated to Blue Mundae’s hometown of Victoria, British Columbia, the bedtracks were recorded at Vancouver’s Mushroom Studio and the overdubs at Zero Gravity in Victoria. The first single, “What’s The Use,” is the only song on the EP cut at Warne’s home studio.

“The song is about the belief that there’s an underlying truth and an underlying obvious answer to everything in life. It’s a rhetorical song,” says the singer, who usually collaborates with his bandmates on the music.

Ben has been playing with bassist Kevin Timmer and drummer Dave Pedde since high school, where they formed their first band together in 2000. The trio went through a series of names, the quirkiest of which was Phillip McCrank. Back then, their style was progressive rock, but by graduation in 2002 they had added another member, original electric guitarist Erik Larsen, and the sound started evolving into a “listener’s type of music,” says Ben. “When it was the three of us, Kevin and I would always joke that we wrote music for other musicians because it was very complicated and difficult to listen to.”

Taking the name Blue Mundae, simply because it evokes a “good feeling,” the band honed its sound live over “years and years” of playing and subsequently recorded an independent album, The Weatherman Says, in Ben’s basement apartment on his home PC. The band eventually signed to 604 Records after a representative from the Vancouver-based label caught its opening set at Victoria’s Lucky Bar. Erik left the band at this point, his life going in a different direction, and was replaced by Dave Zellinsky. The line-up now solidified, Blue Mundae took its material to a number of different producers before working with Warne, who didn’t standardize Blue Mundae’s arrangements, but applied his 20-plus years of production experience to let the songs take their intended shapes.

One of the tracks, “Pile,” is actually a song Ben wrote a decade ago when he was just 13, which went through its own evolution through time. “When I first wrote it, it was just acoustic and me, and then when we got our guitar player and gave it that electric sound, we wanted that British ambience, that Radiohead influence.” The lyric remains the same. “I was trying to imagine if I was in a frustrating situation and just wanted to stick it in the their face and do my best to push humility upon them.”

The 23-year-old singer rarely writes about girls or relationships. “Faint Or Flutter” is a fun song about nerves and anxiety, something he has overcome in recent years, while “People” is an important message about judgment, inspired by his Pentecostal upbringing. “I started to realize when I got out of that phase that I was looking down on people a lot. You’re not supposed to do that,” he says.

“As songwriters, we have long realized that every song does not have to be as pivotal as a John Lennon ‘Imagine,’ but our motivation is still to affect people. It’s the same reason we all listen to good music, it affects you; it defines lives or life in general — and not just our own, but the whole existence of the world. Most of my music is very philosophical. It’s why stuff is the way it is,” adds Ben.

“My goal in my music is to put people’s minds and their hearts at ease, to know that they don’t have to dedicate their life to making a change in the world. All they have to do is change something in their own life.”
No audio samples have been linked to this profile.