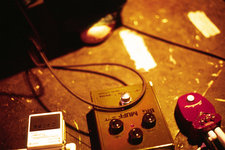 rock from Victoria BC
http://www.myspace.com/bigmuff
Broken Up - Confirmed: Feb. 3, 2013 (Archived)

Brendan O'Byrne
fineasgageband@gmail.com
Contact Info
Past Shows (71)
Combine powerful melodies with Gibson Guitars and Marshall stacks and BigMuff is what you get. Infectious hard-hitting rock riffs and fierce live energy have earned BigMuff a solid standing as an up and coming act worth looking out for.

Formed in late 2000, BigMuff integrates influences such as Veruca Salt, Foo Fighters and Guns n Roses. Recently, BigMuff recorded a brand spanking new EP �Rock Lock� at Mushroom Studios, as well as In-Vision Studios and Studio 1. Currently, BigMuff is getting ready to unleash their brand of vixen rock with supporting tours of both Canada and the United States.

Much Does Victoria: Aug/Oct, 2003
Much Music special on Victoria's local scene. Includes interviews and live performance by BigMuff & other kick ass local acts.

LoadStar Tour, June/July 2003
BigMuff recently returned from a 9 state tour of the US. Taking them from Washington to New Mexico, Colorado, and back. Including performances at L.A.�s Whisky-a-go-go.

Sun & Fun at the Holiday Court, 2002
BigMuff: Studio 1
No audio samples have been linked to this profile.
No member roster has been entered (to link to musician profiles.)
Status: Broken Up
- Last confirmed Feb. 3, 2013
Submit info on this band to our admins