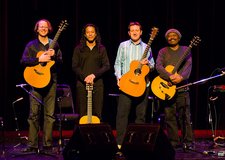 Morgan Brooker
morgan@pacificmusic.net
250-598-1997
Contact Info
Past Shows (4)
International Guitar Night (IGN)is North America’s most successful mobile guitar festival. IGN founder Brian Gore has invited Madagascar native D’Gary and Clive Carroll (from England), along with Trinidadian born Miguel de la Bastide, to join him for the second IGN foray into Canada after eight annual U.S. tours. The emphasis is on original music, including solos, duets and a closing quartet that is a highlight of each concert. In support of this tour Pacific Music, distributed by Warner Music Canada, will be releasing the second International Guitar Night CD on October 2nd. The 2006 IGN perfectly set the stage for this return and we anticipate an equally favourable response to this year’s incarnation of the International Guitar Night.
No audio samples have been linked to this profile.

Status: Unknown
- Last confirmed Sep. 25, 2007
Submit info on this band to our admins