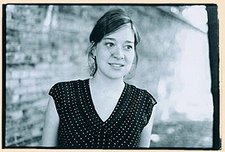 Drawing on influences from old-time jazz standards, bluegrassy-folk and hook-laden pop, Jill Barber has the subtle assuredness of a songwriter with “dead-on phrasing, an impressive range and a knack for squeezing genuine emotion out of a cozy alto purr” says Toronto’s NOW.

In 2002, Barber moved to Halifax, Nova Scotia from her native Ontario. She has since been well received all over the Maritimes, garnering a great deal of attention from critics and audiences alike.She was later invited by the CBC Maritimes to record her latest record at the legendary Studio H in Halifax. Recorded over the course of Fall/Winter 2003, Oh Heart was co-produced by Jill and Atlantic Airwaves producer Glenn Meisner. What emerged was “a collection of intelligent, folk-pop tunes with a hint of cabaret punch and the weathered melodies that make Barber’s music so captivating” says NOW. Barber then teamed up with indie-label Dependent Music to release Oh Heart in March 2004, and signed a national distribution deal with Outside Music.

She also recently garnered a nomination at the inaugural CANADIAN FOLK MUSIC AWARDS, in the category of Best New/Emerging Artist.

With funding awarded by VideoFACT, Jill shot her first video for the song “Oh Heart” with renowned east coast director Colin Mackenzie in the summer of 2004. It spent eighteen weeks on the Bravo Video Top 30 Countdown, and has also been featured on Much Music’s Going Coastal.

Oh Heart continues to be played regularly on CBC Radio, and Jill has been a featured artist on such regional CBC programs as Atlantic Airwaves, Mainstreet, and Ontario Today, as well as the national program, Sounds Like Canada with Shelagh Rogers. Oh Heart has also been embraced by campus/community radio across the country. It held the #15 position in the CKDU year-end charts, and sat in the top 100 in the Canadian Campus/ Community Radio 2004 year-end charts, after having spent 8 weeks in their weekly Top 50 charts, reaching the #7 position.

Since the release of Oh Heart, Jill has by toured extensively, throughout Canada with such established artists as Josh Ritter, Joel Plaskett, Nellie MacKay, Kathleen Edwards and Julia Fordham. She has showcased at various industry festivals including North By Northeast, New Music West, Pop Montreal, and the East Coast Music Awards. She made her American debut at this year’s South By Southwest Festival in Austin, TX, and recently showcased at the NEMO Festival in Boston.

Barber is currently in the process of recording her first full-length record.