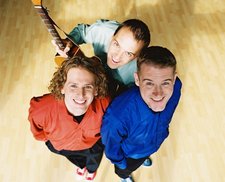 The Arrogant Worms are Canada's best known musical comedy act. From humble beginnings on campus radio in Kingston, Ontario; they have now performed from Saint John to Victoria and Orlando to Prince Rupert. The three-man comedy troupe uses guitar, bass, great stage presence, super-tight harmonies and the sharpest of wit, The Worms are on a mission to make you laugh. They are Canada's self-proclaimed Clowned Princes of Humour, Purveyors of the Absurd, and Ambassadors of Fun.
The Worms find their roots in folk and acoustic rock, but borrow from Celtic, country, reggae, bluegrass, surf music and even Gospel. SEVEN popular CDs, three videos, the most requested song on the internationally syndicated "Dr. Demento Show", and standing ovations from audiences every where.

The Worms have made numerous appearances at festivals from coast-to-coast, piling on the air miles in their reckless pursuit of fun and profit. Their live performances have a reputation for high energy, a playful atmosphere and slightly unusual audience participation. Recently, they performed on Parliament Hill on Canada Day to well over 100,000 people, received standing ovations at Folk Festivals and performed a new musical, "King of the Surf" at the Edmonton Fringe Festival.

The Arrogant Worms continue to be CBC Radio darlings but their music now pops up on commercial radio and television. They have been seen on many regional shows and are featured on the new Comedy Channel.

They have never been on the Rita MacNeil show. However, Ms. MacNeil has never been invited to contribute to an Arrogant Worms album, so there may be some bitterness there
No audio samples have been linked to this profile.
No member roster has been entered (to link to musician profiles.)
Status: Unknown
- Last confirmed Feb. 14, 2011
Submit info on this band to our admins