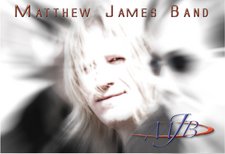 Matthew James
mjband@gmail.com
(250) 415 0893
Contact Info
MATTHEW JAMES is an exceptional songwriter, and an accomplished guitarist, producer and arranger. Through a wealth of experience and real world education over the past several years, Matthew has shown himself to be a first class musician, and an talented performer. From working as a writer and producer for Larry Norman (Solid Rock Records), to performing in front of a crowd of 30,000 at Creation Fest West, Matthew is ready to take the music scene by storm.

Along with Matthew, the Matthew James Band is made up of 4 great musicians: Mitch Guindon, Jon Tanis, Lee Macrae, and Anna Louise Moorman.

"Dirty" Mitch Guindon came to the band with a spectacular resume. From the time he first picked up the sticks at age nine (rocking the neighbourhood from his parents' basement) until his most recent gig playing and touring with Nickelback, Mitch has shown a true talent and love for rhythm. Mitch brings a broad palette of musical influences and a solid background in hard-hitting live performance to the Matthew James Band and is an energetic and entertaining performer on the stage.

Jon Tanis has stood on his own for years heading up the Tanis Band, touring festivals and shows in the northwest. Matthew engineered and produced their debut cd "Tanis", and since had dreamed of having Jon in the band to bring that sweet flavour and unique guitar playing to the stage.

Lee Macrae is the 2nd generation pro bassist in his family. Taking after his father, Lee brings a solid and cool feel to build a great sound on. From a heavy push to a slow funk, Lee seems to bring it all together. Solid, but liquid at the same time.

Anna Louise Moorman is a welcome addition to the band. Originally with classical education, Anna Louise brings freshness to the sound with her complimentary keyboard harmonies and soothing vocals. Anna has a degree in piano performance from the University of Toronto.
No audio samples have been linked to this profile.
No member roster has been entered (to link to musician profiles.)
Status: Unknown
- Last confirmed Sep. 10, 2005
Submit info on this band to our admins