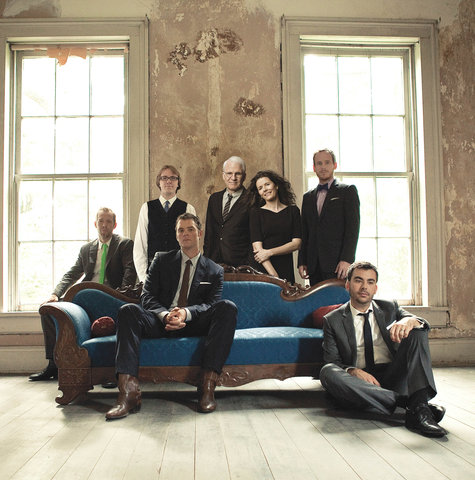 matt laundrie
hightideconcerts@shaw.ca
250-884-7625
Contact Info
Past Shows (2)
"This album feels like a giant step into uncharted territory for me," Steve Martin says of Love Has Come for You, his remarkable new collaboration with Edie Brickell. "When we started, we thought we were just playing around. But when we finished, we realized we weren't."

Although the new musical partners have already built widely-loved individual bodies of work, their inaugural duo effort is a substantial departure, as a well as a creative milestone, for both artists. Love Has Come for You offers 13 eloquently rootsy Martin/Brickell compositions that combine the former's inventive, expressive five-string banjo work with the latter's heart-tugging vocals and vivid, detail-rich lyrics.

"This is the kind of music that I've always wanted to make, but I never knew how until now," Brickell states, adding, "I just fell in love with all of these songs, because they all represent something that's true."

Indeed, such deeply evocative numbers as "When You Get to Asheville," "Sarah Jane and the Iron Mountain Baby," "Remember Me This Way" and the haunting title track offer playful, resonant character studies, conveying a wealth of imagery, emotion and musical ideas within spacious, mostly acoustic arrangements and irresistibly accessible tunes.

Steve Martin is currently in the fifth decade of a uniquely varied and accomplished career in which he's excelled as a comedian, actor, author and playwright, and as a Grammy-winning, boundary-pushing bluegrass banjoist and composer. His fellow Texas native Edie Brickell initially burst onto the national scene in the late 1980s fronting the New Bohemians, and has since carved out an iconoclastic solo career that's solidified her reputation as a uniquely compelling singer and a songwriter of rare insight.

Love Has Come for You is the product of a vibrant songwriting partnership that took on a life of its own after Martin invited Brickell to write lyrics for a banjo tune he'd recently come up with.

"I played it for her, and she walked around the room and hummed some lyrics, which she later recorded and sent to me," Martin recalls. "I realized that Edie's approach is that she works best when she goes away and does it herself, and that became the blueprint for how we worked together."

Despite the fact that Martin and Brickell lived on opposite coasts, their working relationship quickly blossomed, with the two writing separately and exchanging digital files via email.

"I'd write the banjo melodies, and then Edie would take them and write the lyrics and come up with a melody to work against the banjo," Martin explains. "There was a point when we were in such a zone that I was writing a song a day, and the next day I would get the song back from Edie with the lyrics. Looking in my inbox and seeing an attachment from Edie was always like getting a Christmas present."

"Steve worked really fast, and every time I turned around there was a new banjo melody coming at me, which was very exciting," Brickell adds. "The music inspired the lyrics, and the stories came straight out of Steve's melodies. I would sing along to the melody, and the lyrics would come all at once. Then I'd pull out my iPhone and record it. With most of the songs, it was so easy; I'd just hear the tune and there were all these images and pictures, and all you had to do was pull the lyrics out of the air."

The results of the pair's unconventional co-writing method are both organic and inspired, combining the gentle yet feisty humanity of Brickell's vocals with the effortless economy of Martin's banjo work, whose understated subtlety contrasts the fleet-fingered picking he's employed on his acclaimed bluegrass recordings.

"It's the way I've longed to play and hear the banjo for so long, rather than it being present at every moment and playing sixty notes a second," Martin says. "I think the banjo can be so evocative when it's used sparingly, and that was in the back of my mind as we were writing. In these songs, the point is to tell the story and get out."

The collaborative writing method allowed Brickell to channel some personal history that she hadn't explored previously. "Steve's banjo melodies brought a sense of my family and my history into the songwriting," she notes. "I grew up around a real matriarchal society. My grandmother was one of 11, and she and her sisters were always at the house playing cards and casually gossiping and telling all these colorful stories of scandals and tragedies about ‘down home’ - Paris, Texas. There's a lot of that in these songs. I think that the characters in these songs are all me, or at least there's always some little something in there that's how I feel and think about things."

The project also inspired her to tap into her longstanding affinity for vintage country music. "I'd always had that element in me, but I'd never had the opportunity to let it out," she says. "About ten years ago, I started listening a lot to Bob Wills and Buck Owens, because I love the lyrics and the stories and the sense of fun. I got into that during the winters in New York and it really lifted my heart and brought sunshine right into my kitchen. And I thought, if I'm drawn to the sunshine in this music, why aren't I making music like this? I thought, gee, I'd love to be part of something like this, but I didn't know how, especially when I was writing alone. So when Steve came to me with this and I heard this other voice inside and was able to express these stories and this sensibility, I thought I'd died and gone to heaven."

Once they'd written Love Has Come for You's 13 songs, Martin and Brickell agreed that the material called for a recording approach that would maintain the spare intimacy of their original lo-fi demos. Towards that end, they called upon legendary producer and longtime Martin friend Peter Asher.

"Peter turned out to be absolutely the right guy, and I love what he did," Martin says, adding, "We started out with these homespun demos that Edie and I had recorded on an iPhone or iPad, and we kind of fell in love with the sound of those. We wanted to keep that feeling, so Edie and I recorded our tracks for the album very quickly, in about four and a half days, and then we added other people's parts after that."

Among the notable players contributing to the album are rising-star bassist Esperanza Spalding, veteran studio guitarist Waddy Wachtel and Nickel Creek alumni Sara Watkins and Sean Watkins, as well as the members of the esteemed bluegrass combo the Steep Canyon Rangers, with whom Martin has recorded and toured extensively. The judicious use of outside musicians results in a variety of instrumental settings that seamlessly support the emotional content of the songs, from the stripped-down vocals-and-banjo performance of "Yes She Did" to the rollicking acoustic ensemble of "Get Along Stray Dog" to the rousing full-band arrangement of "Sun's Gonna Shine."

"This record was just so much fun for me, and I'm so happy to be given the opportunity to write this way," Brickell asserts. "I'm still just floating and speechless over the whole thing."

"As time goes on, I grow to appreciate these songs more and more, and to appreciate the great lyrics and incredible narratives that Edie brought to it," Martin concludes. "I think that the goal of a collaboration should be to come up with something that each individual wouldn't have come up with on their own, and I think that we've done that here."
No audio samples have been linked to this profile.
No member roster has been entered (to link to musician profiles.) 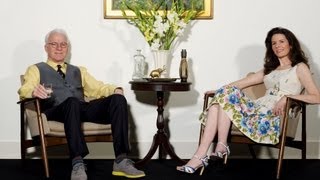 A Conversation with Steve Martin and Edie Brickell: "Love Ha... 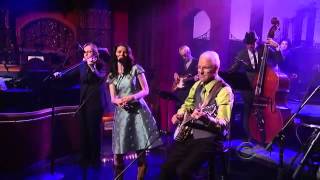 Steve Martin & Edie Brickell - When You Get to Asheville - D...