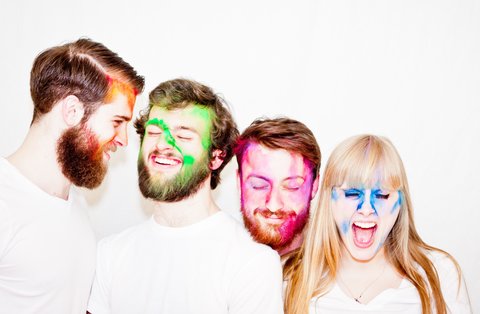 Meg Warren
info@reparteemusic.ca
7096319277
Contact Info
Past Shows (5)
Event Photo Galleries (1)
Before she started Repartee, Meg Warren was a frustrated opera singer. She loved music, but hated the formality - so she started a synth-pop band. Repartee played their first gig in St. John's in 2009 and while a lot has changed since then, one thing remains the same - Repartee want to make you dance. In fact one publication says they can make you dance 'without giving a f*** about how foolish you look' (the Muse).

The band's career has been steadily growing over the past three years with the addition of members Robbie Brett (The Pre-Raphaelites, Hear/Say), and Nick Coultas-Clarke and Josh Banfield (Catcher). In 2010 they released their first EP, 'Lost Like We All Are', to a sold out crowd at the legendary The Ship Pub in St. Johns. That same year they were named the Newfoundland Herald's prestigious 'Band To Watch' for 2011. They received the full MusicNL Sound Recording Grant and recorded their debut self-titled album in 2011. The album was released to critical acclaim, strong sales and it was shortlisted at the Atlantis Music Prize for the best album released in Newfoundland that year.

Repartee have spent the last year feverishly and passionately touring. Aiming to expand their fan-base outside of Newfoundland - they've showcased at the Halifax Pop Explosion, the East Coast Music Awards, and Canadian Music Week. They've shared the stage with Arkells, Mother Mother, Hey Rosetta, USS, Jenn Grant, Rich Aucoin, Shotgun Jimmie, The Novaks, with more and more bands calling them to share a bill. Repartee continue to establish themselves as one of Newfoundlands hottest exports through shows like the recent Torbay 250, where they shared the bill with the likes of The Trews, Jimmy Rankin and Great Big Sea. The band won all five MusicNL Awards they were nominated for - FACTOR Album of the Year, Group of the Year, Rising Star, Fan Choice Entertainer of the Year, and Pop/Rock Artist of the Year. They were nominated for Rising Star of the Year at the 2013 East Coast Music Awards where they performed at the ECMA Gala along with Classified, Ashley MacIsaac, Rich Aucoin, and many more. They embark on their first cross-country tour in November 2013 and will continue to tour until the end of the year.

With an electric live show, hooky melodies and poignant, honest lyrics – Repartee are poised to do good things for pop music, for Newfoundland.
No audio samples have been linked to this profile.

Status: Unknown
- Last confirmed Nov. 15, 2013
Submit info on this band to our admins