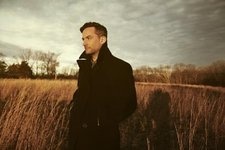 Simon Green, AKA Bonobo, is an artist very much at the peak of his significant powers. His 2010 album ‘Black Sands’
was the high watermark of his career to date; a masterful record, marrying Green’s inimitable melodic genius to cutting
edge electronics, bass and drums.
Black Sands went on to sell over 150,000 copies worldwide, and since its release, Bonobo has toured the world with
his live band, wowing audiences of thousands at a time with the hypnotic, extended live versions of the album’s tracks.
He sold out both the Roundhouse and The Forum in London, and played a 22 date US tour that took in everywhere
from Ashville NC to New York City. He amassed more than 16 million recorded plays on LastFM and over 301,000
likes on Facebook. The songs ‘Kiara’ and ‘Eyedsown’ - both featuring the breathtaking, moving tones of Andreya Tria-
na - have gone on to reach something approaching hit status.
Now, in 2013, he stands ready to take things up yet another notch. The North Borders is another long stride forward
- both a natural evolution and a continuation of the electronic palette of Black Sands. Thematic, resonant, addictive
and perfectly formed, it’s a thrillingly coherent statement piece. With vocal features from no less than Erykah Badu, as
well as Grey Reverend (Cinematic Orchestra) and Cornelia (Portico Quartet) it’s another finely balanced body of work,
leaving room for the beautiful, rich productions themselves to breathe and shine.
Bonobo has a long history of unearthing new talent (Andreya Triana, Bjaika) and The North Borders sees him do so
once again. The startling vocals of new collaborator Szjerdine are sprinkled across the North Borders, and Green has
yet again found the perfect voice to enhance where he’s at.
With a huge run of international tour dates set to commence shortly after the album’s Spring release date, plus a host
of weighty press and radio campaigns and a bleeding edge online campaign, 2013 looks set to be Simon Green’s
year, which is very good news for the rest of us, too.
No audio samples have been linked to this profile.
No member roster has been entered (to link to musician profiles.)
Status: Unknown
- Last confirmed Mar. 14, 2013
Submit info on this band to our admins