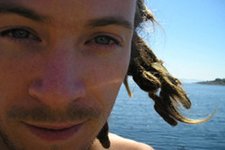 Coming from the nation’s capital to settle in Victoria, Corwin Fox is a budding and innovative musician that fuses elements of folk, bluegrass and hip hop into his musical creations. Fox has created his own evolving style of folk music that seems best classified as “neo-folk.” Some of his influences include Bob Dylan, Bob Marley, Ron Sexsmith, Dead Prez, XTC and John Zorn. With these influences and a gifted voice, Corwin Fox’s personal/political folk songs will have you wanting to sing along. Between 2000 – 2002 he met Christiaan Anderson and Dean Watson with whom he formed the art-rock band Balls Falls and the record label Coqi Records. In 2001 he won EMI Music Publishing Canada’s award for best song for “Doctor God,” appearing on the Balls Falls album. Fox’s debut solo album Can You Sleep? was Coqi’s first release and was followed up in 2002 by Compassionate Relay which contained the classic tracks “Bring Me Back,” “We Love the Beehive Burners” and "Fantastic Mr. Fox" (named after Roald Dahl’s children’s book). Fox’s latest CD Dream Water Rain Music is a deeply personal and highly political album. Initially released in conjunction with his extensive Australian tour, Dream Water Rain Music sold out of its first pressing in late 2004. This album is Fox’s third and most ambitious solo album in four years highlighting yet another impressive cast of musicians such as Daniel Lapp (Lappelectro), Richard Parry (Arcade Fire), Tobin Frank (Spirit of the West) and Wynn Gogol (Harry Manx) as well as countless other musical guests and MCs.