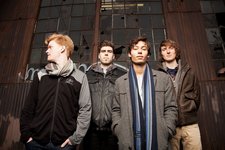 Eileen
eileen@woodrock.ca
250-886-5209
Contact Info
Past Shows (13)
“Michael Wood writes songs that are contemporary and surprising yet somehow familiar, like the listener is remembering them when they hear them for the first time. He’s an engaging performer too.” says producer/musician Shaun Verreault (Wide Mouth Mason). If you have been seeking something new amid the cluttered music scene, Michael Wood Band might just be the answer. Fans are immediately struck by the addictive melodies, and ultimately won over by all the elements that make this music great. The live show is pure energy, with animated guitar leads, and a seriously infectious groove. Dynamic guitar and driving rhythms power this refined alternative rock offering, providing a showcase for Michael Wood’s fresh vocals and perceptive lyrics.

The upcoming album “Rubble Town" will be released spring 2015 and features Michael Wood on guitars and vocals, Doug Elliot (Odds) on bass and Tim Proznick (Daniel Wesley) on percussion. Produced by multiple Juno nominated Shawn Verreault (Wide Mouth Mason), and recorded at Green House Studios (54-40, Matthew Good Band, Odds, Spirit of the West, Barney Bentall, Colin James) the songs occupy a breadth of musical territory, from punchy alt-rockers to edgy folk and satiating pop. “Michael Wood is one of the most promising talents I've ever had the pleasure of working with...and I'm sure he is going to continue to impress. (He) is the quintessential songwriter. He manages to display a clever and diverse variety of songs with his unique talent, all the while without wearing his influences on his sleeve." enthused Doug Naugler (Sweatshop Union, Gaye Delorme, Tommy Chong) engineer.

The release of his first album launched a busy stint for the West Coast artist, taking him right across the country, from Tofino BC to Halifax Nova Scotia. Michael Wood Band has played everything from small charity shows to large festivals, including a performance at the Calgary Stampede and opening spots for Buckcherry, Chilliwack, Platinum Blonde, Faber Drive and Prism “It’s really great to see people responding so positively to our music.” says Michael. “People hear the songs and see our video for the single “End of the World” and are really excited to have us out to play. It’s been really encouraging.“ One club owner raves “We had an incredible response from the patrons and staff which all had nothing but great things to say…they were blown away by their ability and diversity.”

Response from industry experts has also been positive. Recently MWB was selected as a semi-finalist in the International Songwriting Competition from 20 thousand entries worldwide, nominated for two Vancouver Island Music Awards, and recognized as one of Victoria’s hottest bands of 2013 by Monday Magazine. Receiving radio play nationwide, MWB was voted New Artist of the Month on Ontario’s CKXS FM. The disk continues to bring new fans, proving that Michael Wood is as dedicated to writing and recording great songs as to playing an incredible live show.
No audio samples have been linked to this profile.

Status: Available for Shows/Gigs
Call us! - Last confirmed Mar. 3, 2015
Submit info on this band to our admins