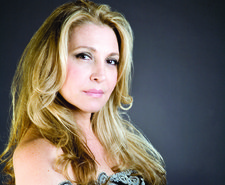 Born in Sao Paulo, Brazil, Eliane Elias has taken that lyrical musical birthright and woven it throughout a 35-year career as a pianist, singer, composer, and arranger. With multiple Grammy nominations to her credit, the versatile Elias has long been one of the most impressively creative artists working along the entire spectrum of jazz, from bop- influenced instrumentals to seductive jazz-pop confections. She was the first woman instru- mentalist to be featured on the cover of DownBeat magazine, and has recorded over 20 albums. She has a global reach, being the number two jazz artist in France in terms of sales, while her 2007 Something For You received the “Best Vocal Album of the Year” award in Japan. Elias often incorporates aspects of classical and Brazilian into her compositions, and has shaped her immense talent into a distinc- tively recognizable musical style that combines passion with elegance. Her latest CD, Light My Fire, on Concord Picante, is a mix of originals and covers by everyone from The Doors to Paul Desmond. With Rubens de La Corte guitar, Marc Johnson bass, and Rafael Barata drums.
No audio samples have been linked to this profile.
No member roster has been entered (to link to musician profiles.)
Status: Unknown
- Last confirmed May. 11, 2012
Submit info on this band to our admins