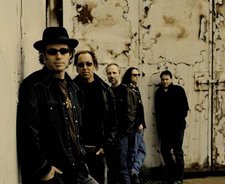 Available for Shows/Gigs - Confirmed: Dec. 31, 2015 (Awaiting Update)
http://www.barneybentall.com
from Vancouver BC
Past Shows (8)

BARNEY BENTALL & THE LEGENDARY HEARTS http://www.barneybentall.com/
Born in Toronto, Barney Bentall grew up in Calgary, moving to Vancouver in 1978 to try his hand at music. He formed the band Brandon Wolf and released two independent discs and one for A&M Records, all recorded at the infamous Little Mountain Sound. A dedicated family man, he faced a struggle to keep writing and performing music while supporting four children. In 1988 at the point when a day job seemed imminent, Barney formed The Legendary Hearts and signed with Columbia/CBS Records. Their self‐titled debut sold over 100,000 copies and featured three hit singles in Canada, winning a Juno in 1989. In 2000, Bentall moved to British Columbia to operate a cattle ranch. After this change of perspective, 2007 brought the solo release of Gift Horse on True North Records.

Status: Available for Shows/Gigs
- Last confirmed Dec. 31, 2015
Submit info on this band to our admins