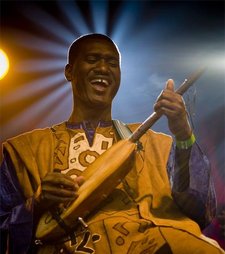 From Mali, the excellent Bassekou has the recent CD out on a new world music imprint form the Sub Pop label, called NEXT AMBIANCE. The CD is called I Speak Fula. This band rocks and he has also played h Toumani Diabate.

Bassekou Kouyate & Ngoni ba:
Malian Bassekou Kouyate made his international debut with the 2007 album Segu Blue. Released by Out Here Records, the album received critical acclaim and won the band the coveted honor of performing on the Jools Holland Show, as well as 2008 BBC 3 nomination for Best Newcomer , going on to win in both the Album of the Year category as well as Best African Act. Their sophomore effort, I Speak Fula, was released on September 21, 2009 in the UK and, unsurprisingly, received widespread critical acclaim. Known for their riveting live performances, I Speak Fula more effectively conveys the energy and infectious intensity of that experience than the band’s first album. In October 2009 Bassekou once again performed on The Jools Holland Show alongside the likes of Yoko Ono and The Dead Weather.

SEATTLE, WA – Sub Pop Records and KEXP radio host Jon Kertzer have come together to form Next Ambiance, a world music imprint. Malian band Bassekou Kouyate & Ngoni ba’s I Speak Fula will be the first album out on Next Ambiance, and is scheduled for digital release on iTunes, December 1st, 2009 and for CD release on February 2nd, 2009. The band will embark on their first US tour, opening for nine-time Grammy winner Bela Fleck, in early 2010 in support of the record.

Next Ambiance:
Founded by Jon Kertzer, the host of KEXP’s “The Best Ambiance” radio show, a long-running weekly program that focuses on both pop and traditional music from the African continent, Next Ambiance continues the musical exploration, with an emphasis on mind-blowing and life-changing artists with no particular regional or cultural bias.

“I’ve listened and learned so much from Jon’s show (”The Best Ambiance") for half of my life. It just seemed natural to put his knowledge, resources and remarkable taste to further use. It’ll certainly be a boon to listeners everywhere," commented Sub Pop Records co-founder, Jonathan Poneman. “Our first release with Bassekou Kouyate and his incredible band Ngoni ba from Mali in West Africa, is the perfect way to begin this new adventure. Their album I Speak Fula captures this truly original music, like nothing you have heard before.”
No audio samples have been linked to this profile.
No member roster has been entered (to link to musician profiles.)
Status: Unknown
- Last confirmed May. 13, 2010
Submit info on this band to our admins