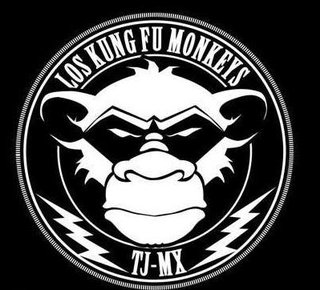 Los Kung Fu Monkeys are getting ready this 2011 to records a new record, go on tour, and many surprises.

This Mexican touring machine started rolling since 1997, and till date they haven’t stopped to impress Mexican, and international audiences in every single show. Proving that these sons of Tijuana have a great deal to offer.

These “Road Warriors” have no fear of what is to come to them on the road they have chosen, police harassment, corruption, robbed at gun point, no fear of being stranded in the middle of nowhere on their way to a show, because aside of these obstacles they stand their ground and keep fighting. A fight that you as fan make this dream have sense, and all worth it.

Today after so many tours they decided to take a well deserved “Break”. To get in to the studio to write all the songs that will be the next album of these Tijuana natives. Making the commitment that this will be the best album till date.

Now they are in to create a matured sound as the years have past, returning to their roots, experimenting with other rhythms, and sound that have never work with before, without loosing any of the power, and energy that has made one of the most signatures most recognized in Mexican music. Leaving clear that Los Kung Fu Monkeys are one of the strongest and well respected underground acts in Mexico.

That is why Los Kung Fu Monkeys keep being the most consolidated, constant, and recognized bands to an international level…
No audio samples have been linked to this profile.
No member roster has been entered (to link to musician profiles.)
Status: Unknown
Contact our booking agent Paget Williams at [email protected] - Last confirmed Mar. 18, 2014
Submit info on this band to our admins