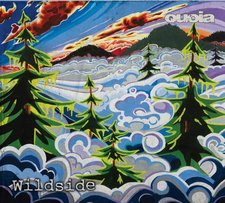 Mike Hann
hanner@radiocontact.ca
2508934266
Contact Info
Past Shows (33)
Formed in the spring of 2008, Quoia {Kwoi - a} is a collective of musicians currently residing on Vancouver Island, British Columbia. Quoia is a band known for their high-energy liveshow and uplifting grooves. Their music is a perfect blend of originality and accessibility, and the lyrics are clear, considered and meaningful. They perform a dynamically entertaining show with a tightness and style possible only through years of focused playing. Quoia focuses their live energy with genre-hopping sounds and a stage presence that always has fans dancing and singing along.

This quintet quickly developed a loyal fan base by playing over 60 shows in their first year. They originally garnered much attention through their hugely popular weekly session at the Canoe Brewpub in Victoria, B.C.. The night quickly grew in popularity and soon consistently packed the 410-person venue to capacity. Before the close of 2009, the group had also enjoyed such highlights as playing to 12,000 people at Rexall Place in Edmonton, having songs licensed and used in an internationally distributed surf film, and a trio of sold out shows at fan favourite Sugar Nightclub.

In 2010, the attention surrounding the group continued to grow rapidly. Following the release of their first EP "Five Feathers" early in the year, they were offered a multitude of opportunities. They excited audiences at festivals such as;
The TD Victoria International Jazz Festival, Blue Sky Festival, Deraylor Music Festival, Sunshine Music Festival, Rifflandia 3 and more.
They had the honor sharing the stage with perennial rockers Nazareth, Tommy Guererro, Bill Bourne, Rachelle Van Zatten, Toshi Raegon, the legendary Taj Mahal at the prestigious Royal Theatre, and festival billing with Tom Cochrane, Colin James, Barney Bentall and more.

In 2011 the success has continued for the band. While working diligently in the studio on their new album Wildside, they continued to tour, play club shows and at festivals such as Winterfest in Edmonton, Song and Surf Festival, The Pacific Rim Whale Festival, Vancouver Island Cultural Festival, Kulth Music Festival and more. They shared bills with names like Ron Sexsmith, Stars, Shane Phillip, TGLTP and more. On July 1st, 2011 the group recieved the honor of being selected to play for 30,000 people on the main stage for Victoria B.C.'s. Canada Day Celebrations.

As a result of the success, Quoia has been the subject of many feature articles and t.v. spots. They were subjects of a documentary and nominated in the 2011 M Awards for "Favorite Band". The once again had their songs used a documentary soundtrack, recieved radio play on stations like CBC Radio One and were asked to be on the cover of the popular publication Monday Magazine.

Furthermore, they are instrumental in founding and producing the highly successful Tall Tree Music Festival in Port Renfrew, B.C.. The popular event has featured many acts from the thriving music scene on southern Vancouver Island including Kuba Oms, Jets Overhead, Current Swell, Jon and Roy, The Racoons, Vince Vaccaro, Aidan Knight, Long Walk Short Dock and more. In 2011 the event received national media coverage when it was listed by CBC Radio 3 as one of their "Favorite Canadian Festivals".

Now with the release of their widely anticipated new album WILDSIDE and some big dates coming up, their future plans are simple. Continue to grow, and to enjoy themselves along the way.

Quoia is made up of multi-instrumentalists Alex Nicholls [Mandolin, Violin, Vox] and Mike Roma [Banjo,Guitar, Vox], Mike Hann [Guitar, Lead Vox,], and Keith Gallant [Drums, Percussion, Vox].
No audio samples have been linked to this profile.

Status: Unknown
- Last confirmed Nov. 2, 2011
Submit info on this band to our admins