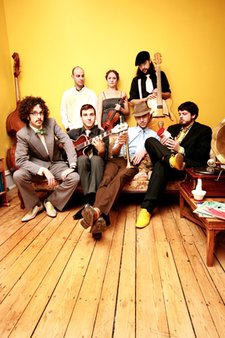 Halifax-based Gypsophilia was initially inspired by the music of French jazz guitarist Django Reinhardt, but soon found its own distinctive sound through unique and original compositions and the melding of the band members varied backgrounds and influences including klezmer, funk, classical music, indie rock, hard bob and post bop. The result is an exciting and eclectic band of seven young instrumentalists whose performance and compositional abilities are first class.

“One of the hottest jazz bands to hit Halifax in years.” – CBC
No audio samples have been linked to this profile.

Status: Unknown
- Last confirmed Apr. 3, 2009
Submit info on this band to our admins