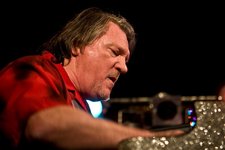 "Brian Auger is one of the best B-3 artists I have ever heard in my life. His technique is awesome and the amount of energy he generates is unparalleled and relentless.” - Herbie Hancock.

"Those who remain oblivious to the obvious delights of Brian Auger's Oblivion Express do so at their own risk." - The Beastie Boys.

For over forty years, Brian Auger has been a musician’s musician. Jazz pianist, bandleader, session man, Hammond B3 innovator, and key player in the rise of jazz/rock fusion, Brian has done it all and then some. An incredible gentleman with one of the most varied careers in music, he has incorporated jazz, early British pop, R&B, soul and rock into an incredible catalog that has won him legions of fans all over the world.

Auger is considered to be the foremost exponent of the Hammond B3 organ and has been a professional musician since 1963. By 1964, Auger won the Melody Maker Jazz Poll before he kicked off his collaborations with Rod Stewart, Jimi Hendrix and Eric Burdon, to name but a few.

He is credited with being the first jazz rock fusion artist who made it big in the jazz and rock worlds with his three distinctive bands – Steampacket (1966, featuring Rod Stewart), The Trinity (1967-1970) and The Oblivion Express (1970 to present).

He has toured as an opening act for Led Zeppelin, ZZ Top and Herbie Hancock’s Headhunters, to name a but a few.

In 1968 he scored his first UK Top 10 single with “This Wheel’s On Fire” featuring Julie Driscoll on lead vocals. By 1970 he formed the Oblivion Express, and by the late 80s and early 90s he was hailed the “Godfather of Acid Jazz”.

Auger’s stated intention had always been to overlay soul and funk rhythms with jazz harmonies and solos. His current band line-up of the Oblivion Express includes his daughter Savannah on vocals and son Karma on drums.

"Brian is one of the originators of the high energy Hammond organ style along with Larry Young in the tradition of Jimmy Smith. In the late sixties our paths crossed in London at different times, socially and also playing with the likes of Jimi Hendrix and the guys from Cream.”
No audio samples have been linked to this profile.
No member roster has been entered (to link to musician profiles.)
Status: Unknown
- Last confirmed Feb. 23, 2009
Submit info on this band to our admins