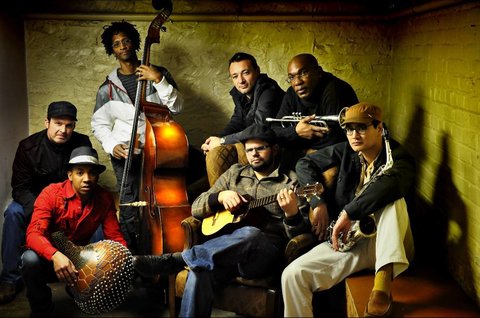 from Toronto Ontario
http://www.kobotown.com
Available for Shows/Gigs - Confirmed: May. 28, 2015 (Awaiting Update)
Past Shows (9)

Kobo Town, founded in 2004, blends Canadian and Caribbean cultures through the contemporary reimagining of calypso music. Founder, Drew Gonsalves, grew up in Trinidad and moved to Ottawa when he was 13 with his Québécois mother. Caught between two worlds, Gonsalves turned to music and poetry, eventually creating Kobo Town with fellow Trini expats and members from his former band, Outcry.

Kobo Town is named after a neighbourhood in Port-of-Spain, the capital of The Republic of Trinidad and Tobago, and the birthplace of calypso music. Kobo Town is inspired primarily by calypso, and its ability to combine elements of storytelling with up-beat, tropical tunes. Kobo Town released their first album Independence in 2007 followed by Jumbie in the Jukebox in 2013. Jumbie in the Jukebox, predominantly recorded in Belize, was nominated for the 2013 Polaris Music Prize recognizing the year’s best Canadian album

Jumbie is a type of spirit (good or evil) told in some Caribbean folklore to frighten children to keep out of harm—our closest equivalent would be the boogie man. The album envisions a jukebox inhabited by a jumbie projecting sounds inspired by West -Indian music. Kobo Town tells a tale in every song and the more you listen, the deeper the message integrates. Kobo Town is a band you can bring anyone and everyone to see.

View all tracks for this artist (1)
No member roster has been entered (to link to musician profiles.)
Status: Available for Shows/Gigs
- Last confirmed May. 28, 2015
Submit info on this band to our admins