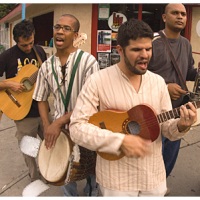 Music: Folk / Celtic / Latin / World, Funk / R&B, Pop / Rock / Indie, Reggae / Ska / Dub
Founded and fronted by émigré Trinidadian songwriter Drew Gonsalves, Kobo Town’s music has been variously described as “an intoxicating blend of lilting calypsonian wit, dancehall reggae and trombone-heavy brass” (Guardian) and a “unique, transnational composite of rhythm, poetry and activist journalism.”(Exclaim!) From their home in Toronto, the JUNO-winning group has brought their distinct calypso-inspired sound to audiences across the world, from Port-of-Spain to Paris and from Montreal to Malaysia.At once brooding and joyous, intensely poetic and highly danceable, Gonsalves’ songs betray deep roots in Caribbean folk music, while the band delivers them with an indomitable energy that has earned them a considerable following far beyond the niche of world music enthusiasts and calypso fans.
Warming up the evening is Victoria’s own COMPASSION GORILLA.
Compassion Gorilla has a relentless drive to translate earthy and folkloric sounds into an explosive performance fit for the modern dancefloor. Infused with elements of Latin, Balkan, and North American folk music, their unique brew has been the life of wild dance parties for almost a decade, and while its music defies categorization the band keeps audiences feeling comfortably at home.
ARTIST WEBSITE: http://www.compassiongorilla.com/epk.html
*************************
Caravan World Rhythms is a BC non-profit presenter of world music and dance events, featuring artists from diverse cultural backgrounds from across Canada and around the globe. We would like to thank our funders, including Creative BC, the Canada Council, and Canadian Heritage.

Kobo Town, founded in 2004, blends Canadian and Caribbean cultures through the contemporary reimagining of calypso music. Founder, Drew Gonsalves, grew up in Trinidad and moved to Ottawa when he was 13 with his Québécois mother. Caught between two worlds, Gonsalves turned to music and poetry, eventually creating Kobo Town with fellow Trini expats... more info
Audio: Half of the Houses
Articles: Victoria suited to calypso-rock, Kobo Town's Drew Gonsalves says -