How did D'Arcy ska? 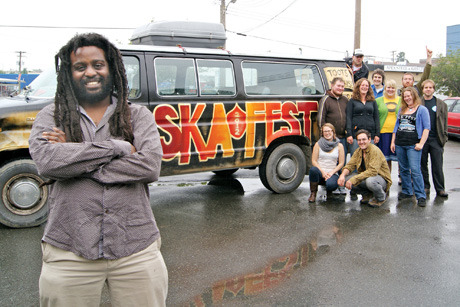 Ska Fest has been a part of my life for just over a decade now. I would like to use this space to discuss how it is I found out about Ska Fest, but to do that, we have to talk about how I first found out about ska music. I wish my story about finding ska music was as cool as those you often here. I love the stories about people who had a sibling, a friend’s sibling, or some weirdo on the street, who gave them some mysterious tape or CD that changed their life. I love the stories about people who were into skating or into some other hobby and found the music though there. Yeah, those stories are always fun to read. Mine is different, but for those who know me, isn’t surprising in the least. I found ska music through a video game.

In February of 2000 I was 11 years old, though would turn 12 soon after. In those days my best friend Bryan (who is now lead singer in a grindcore band) and I would spend all of our weekends locked in his basement playing video games. I think it was around this time that he bought Tony Hawk’s Pro Skater for Nintendo 64. The game itself was super fun at the time, but what really stuck with me were these two tracks in the game. Through the menu you could not only pick the song to play in the background, but see its title and artist as well. I couldn’t tell you why, but Goldfinger’s “Superman” and “New Girl” by the Suicide Machines were the two tracks I would set on repeat and just listen to over and over. Sometimes I would just put the game on to listen to those two songs. Being the age I was, I had no idea there was music outside of the radio, what my family listened to, or Weird Al (Let’s face it, that guy is still awesome).

Maybe a little over a year or so later (when I would have been 13 and 14) I started hanging around with the punks at my school and buying music regularly. I think the first CDs I remember being proud of buying were on a trip I made to A&B Sound. I picked up Less Than Jake’s Hello Rockview and Borders & Boundaries as well as Goldfinger’s Darrin’s Coconut Ass.  I remember them thinking that it was cool that I knew about these bands, when really I had no idea who LTJ was and picked them up because the art and song titles looked cool and were probably on sale. When I first started going out to shows, it was mostly punk bands. Groups like Ghosts, AK-47, Tough as Nails, Machine gun Kelly, and others like Lythic Blue. Then one night, something crazy happened. Some crazy band called One Drop played with AK-47 and Che Chapter 127. They had horns, they had guitars, and you know what? They had fun and positive energy. As much as I loved and still love the aggressive nature of punk music, something about seeing this group live fulfilled all the promises that I expected from listening to groups like Goldfinger and Less Than Jake. And One Drop was only the start.

In 2002 I started hearing about all these ska shows going on, thanks mostly to many of the bands being formed by people around my age. Bands like The Hoochy Girls, One Drop, The Bloodwarmers, The Kiltlifters, and Ten Too Late became something of a weekend tradition. Every Friday night my friends and I would steal wine from parent’s basement and go to Little Fernwood or the Garry Oak Room to just have an amazingly great time. It was around this time that I found out about Ska Fest.

Around this time I was also becoming more politically aware and socially conscious. Both my parents were very supportive in this regard. My mom was part of a political group that would hold regular meetings in our house. After one of them I had chosen to attend (I think it was about GMOs or something) one person their noticed some of my CDs and asked what sort of music I was into.

“Hey, what sort of music do you like?” She asked.

“Mostly punk music. I also really like ska.” I said.

“Have you ever heard of The Slackers?”

“What about Chris Murray or King Django?”

“No...I know Goldfinger and bands like The Suicide Machines.”

It was then that she said I should check these bands out, and she lent me tons of these CDs. That changed my life forever! I thought ska music was some sort of punk music with a horn section, not something that incorporated elements of jazz, soul, and rock. Soon after she recommended I check out the Victoria Ska Fest. I couldn’t believe that there was a festival dedicated to the sort of music that myself and halls of others danced to every week. That summer I went to Ska Fest for the first time. It was a free show in Market Square and had The Kiltlifters, The Abolitionists, and The Hoodwinks.

2002 was the first Ska Fest I ever attended and, obviously, I was hooked. The next year I volunteered for the first time, having heard that you get into the shows that you work on for free. Summer in Victoria is something I still look forward to because I know it’s the sign of yet another Ska Fest. Now that I am among those who help organize the festival every year, and the festival has grown immensely since 2003 when I first volunteered, it is something that I will never be able to give back all that it has done for me. It helped bring me and my girlfriend of 8 years together, I’ve met so many wonderful friends, and maybe most important of all, it still offers someone else out there a chance to discover something amazing for the first time.