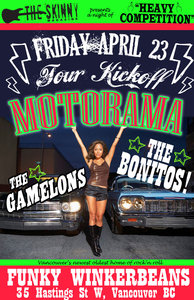 I entered Pat's Pub on Friday March 12th in the year of our lord 2010 to experience Motorama for the first time. There were three bands in the evening and Motorama opened. When I say opened, I mean OPENED. This power trio of punk dug into their instruments and ripped a hole in the time/space continuum, plastering the audience with a frenzy of pure unadulterated talent. Who are these gods? He who is known as Marcus, plays lead like an articulate master and screams into the mic like he's channelling Bonn Scott, Sid Vicious and David Bowie. He who is known as Bryan, hammers at the bass with a razor-sharp intensity and provides perfect vocal blending to Marcus' inspired lyrics. He who is known as The Bertman sets the stage on fire as a rhythm obsessed beast thundering upon the drums with such beautifully consummate abandon that I can only describe him as the stripped-down lean-and-mean Peart-of-punk who hits the mic with the intensity of Animal. If you happen to already be, or you are thinking of sampling what is known as punk, Motorama provides the distilled version. The fine wine of rebellion. Their immense talent and wealth of musical experience was a breath-taking joy to witness and the driving nature of their powerful show is the only way to mosh. Motorama is the ardent punker's Grey Poupon, something to crave, something to savour and definitely something to remember. As an end note, I don't remember the other bands playing that night. Posted: Apr 8, 2010
In this Article Artist(s) Motorama Resource(s) Pat's Pub