Glorywhore Finds the Beauty in Sleaze. 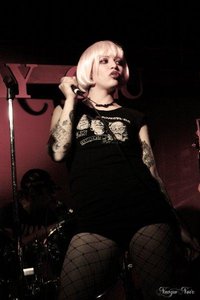 Glorywhore is a great name, and when playing with HookerPop, it's awesome. In the first week of the New Year, I went to the Princeton to check out Glorywhore. What I got was a petite Suicide Girl, Maiwan, with her incredible scratchy growl of a voice and her band of rock'n’roll rebels kicking out a tight, sexy, raunched-out, sleaze-punk show that had me celebrating among other things, the seedy underbelly of the carnival once again.

Besides playing all of their dark, outcast anthems live, they covered an L7 and a Bikini Kill song, Rebel Girl. I am sold. 2010 RIOT grrl.

"To us, Glorywhore is the beauty in sleaze," Maiwan told me when I mentioned that glorywhore is a name that you can call someone who takes credit for something you have done. "Glorywhore formed in 2007 as an outlet for Steviewire and Doc to play some songs that didn't meld with their current band, the Cryptos. Things didn't get serious until I joined in late 2008. Elwood, who played in Toronto based band, Trunk, and had done some studio work on early demos for Glorywhore, later joined the band. We felt that more guitar and vocal melodies were needed, so I asked my friend Ash Riot to join (Ash Riot, Bliss Widow). We began playing shows in June 2009. Due to work constraints, Ash left the band, however will be back to record with us on our upcoming EP that will be due out sometime in 2010."

As far as outcast anthems go, Glorywhore has some great ones, as Maiwan explains: 'Ugly On the Inside’ is a song written by myself and Steviewire about some thoughts on ourselves and people’s deceptions and the way they may see us or others from the outside." The song starts off with Maiwan growling about eyeliner, powdered lips and pretty smile then veers to “if you think I’m sweet - you’re in denial. I feel ugly on the inside.” Classic!