Mad Caddies with guests the Johnstones and Party at the Moontower 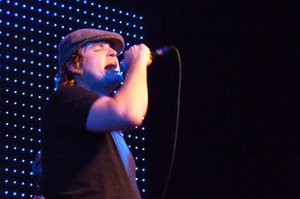 Strolling down Granville Street to Venue, I couldn’t help but notice the somewhat historic 50-foot “Plaza” sign still hanging outside the newly renovated room. That sign was a beacon of nostalgia, much like the veteran headlining act. I never thought I’d miss the Plaza so much; or my youth for that matter.
Local openers, Party At the Moontower, a tribute to Dazed and Confused apparently, won me over with their brand of post hardcore, despite their affinity for melodic vocals, after I noticed that the lead singer/ guitarist was wearing an In Bear Country t-shirt. If that’s not legit, I don’t know what is. It’s highly recommended that you download the quartet’s five song EP, the O’Bannion EP for free at: web link.
The Johnstones were a furry of energy, bouncing around the stage so fast that it was impossible to take any decent pictures. Judging from their appearance, it was hard to take the sextet seriously. The singer, with his curly blonde mane and what I hope are ironic tattoos, looked like an ‘80’s aerobics instructor leading the crowd through the motions sporting a neon green wife beater and matching absurdly tight pants. It was so nice to see a band not take themselves at all seriously, but genuinely be there to have a good time and entertain. Case in point: a rousing rendition of Jerry Lee Lewis’ “Great Balls of Fire.” That is what we like to call a choice cover kids. In fact, the sextet distracted so well from their music with their insanely vibrant antics, impossible facial expressions, sexual tension between each other and, well, capes, that I was truly shocked to find that the energy of their live show is not at all translated on record. But I suppose that ferocity is difficult to capture on record.
By the time the Mad Caddies hit the stage, I was amazed quite frankly that the Vancouver crowd, notorious for being too cool to dance, was still moving; skanking, swaying, slam dancing, stage diving and crowd surfing. It was an almost unheard of phenomena. For a band to crack a Vancouver crowd…well, they had to be doing something right. The band grooved through favourite after favourite, the trombonist in the throws of the crowd, foot barely still on the monitor. I found myself singing along to tracks I had long forgotten. The ska-punk with elements of reggae and Dixieland was an intoxicating mix as the band worked enthusiastically through tracks like “Drinking For Eleven,” “State Of Mind,” “Lay Your Head Down” and “Villains.” Polka numbers like “Monkeys” stirred the crowd into a frenzy, the band feeding off their energy and upping the anti. Everyone was genuinely having a great time, band, girl with “shirt” barely on dancing on stage, militant security unsure or whether to watch or kick her off, and audience alike. The band even debuted a brand new song, one of five recently recorded for their upcoming effort. All in all, I couldn’t ask for a better stroll down memory lane. Posted: Nov 14, 2009
In this Article Artist(s) Mad Caddies, The Johnstones, PARTY AT THE MOONTOWER Resource(s): Venue