The Cobalt Has 60 Days to Eviction

Categories: Other
Published by: The Skinny Magazine
Author: Tanya Harding 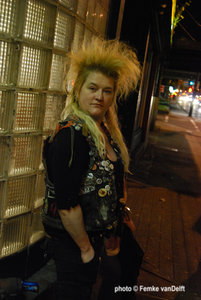 The Cobalt Has 60 Days to Eviction

Friday, July 31, Wendy Thirteen got what every business owner operating on a month-to-month lease fears the most: a letter of eviction.

Surprisingly, the letter was not from the city, which she says has been on side lately, but ultimately from the infamous scumlords, the Sahota family.

Pal Sahota and his accountant, Bilesh Liyanage, told Wendy in person on Friday night, mid-set, that the reason for the eviction was that the liquor licence was being under used. They want the bar open at 9 am instead of 8 pm. “They want it to regress to the drug-infested unlawful days of yore, open for business at 9 am. Who do you think is going to sit in this dungeon with no windows at that time of day? If the money grubbing, greedy bastards wanted more money, why didn’t they just go through the proper channels and raise the lease?” Wendy told me over the phone. She said they wouldn’t give her any other reason before they ran out.

Wendy Thirteen, who has been running Vancouver D.I.Y hardcore bar on and off for nine years, has worked through major ongoing problems with the building and has made the bar a viable venue and a community space for live, heavy, offbeat music and bands to exist.
At one point, because of the state of disrepair (shitwater leaking through the ceiling), she moved her business to the Astoria (named the Asbalt by her) and returned after 2 1/2 years.. “When I took over the Cobalt again after the Asbalt, I had to remove old dirty mattresses and tons of needles. I turned it into a viable venue with no assistance from the landlords.”

The Cobalt is host to many popular weeknight gigs from Fake Jazz Wednesday to Boosh Tuesday. On the weekend, it’s the venue for the punk/metal bands on tour plus local bands and their fans. SNFU and Dayglo Abortions would pack the place. Wendy Thirteen gave musicians jobs at the bar, giving it its laid back and friendly vibe in a sea of mohawks, leather, ripped jeans, spikes and boas. Anything goes and that is a freedom that you can’t find at many other bars in Vancouver. It’s our hardcore bar and the heartbeat of our scene.
Wendy Thirteen has less than 60 days to talk the landlords out of evicting her or to take the greedy fuckers to court. Hopefully she can enlist Pivot, or other help. She told me that her ex-partner in the Cobalt, Leblanc, has called on her behalf and has arranged a meeting with the scumlords. Hopefully, they can talk things out. “I just want the Cobalt to be treated fairly by the slumlords. I believe that after almost 10 years of dedicated service to their holdings that I deserve that,” she said.

“We’ve fought off drug dealers, crackheads, stolen goods rings; proven to the city and police, the safety of the music community. In essence, revitalized a piece of the Downtown Eastside at no expense to the taxpayer.”

She needs letters/testimonials from people illustrating the disgusting mess that she had to take care of because the landlords wouldn’t do their job. “We have endured Third World conditions at the slumpire’s hands sometimes multiple times daily from their neglected hotel repairs.”

She is livid and understands that she has to move fast. Go to the Cobalt and see what you can do to save it. Testimonials are fine. “I will fight for the Cobalt until the end if that is what is meant to be because I believe in it. Please write a letter of support. The triumphs and the tribulations. Every little bit helps. Viva the Cobalt.” Posted: Aug 6, 2009
In this Article Resource(s): The Cobalt