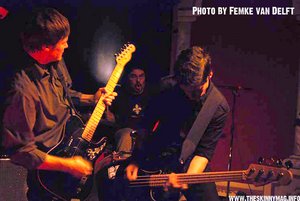 It was a big weekend for live music here in Vancouver as we played host to the Nearly Famous Music Festival, which since the demise of Nerve Magazine has taken the place of the Festival Of Guns. Unfortunately I was only able to make it to Fridays show, but given the caliber of talent on this particular evening, it was more than enough for this kid.

Yes, it was time to dust off the ol’ loafers and make my way down to the Chapel Arts Centre (read, funeral parlor!!) to catch a gig by a couple of my favorite local acts, The Hawaiian Bibles and Bel Riose and guests. A band called Wilderness Years opened the show and I’ll admit to having spent most of their set upstairs in the pool/lounge room so I didn’t get a good feel for what they offered, but they sounded pretty good and my roommate was pretty excited over them, so I guess they did just fine. I hope they made the people happy and go on to win a Grammy or Canadian Idol or something.

For this writer, the spotlight was on the double whammy wall of sound from the next 2 bands, first up being Hawaiian Bibles. Now these boys have had a decent year, having released the Good People CD and played a shit-load of gigs in support of it. And now they are winding down 2008 having added a third member in the form of Jahmeel, the bassist from The Black Halos, as well as working on not only a brand new CD, but a live EP as well. And thank Christ for that, because it means that more people shall be exposed to the heat that is the Bibles!

Launching into their first song, a newbie called ‘Fend For Your Brother’, the Bibles proved why they are just so fucking amazing. With a new member, and one that fits perfectly with the band, they ripped through their set with more intensity than I have seen in the past and, despite a few technical problems and the stress from a last minute venue change, they looked pretty comfortable in their new form. It’s interesting to see Devin on guitar. He looked like a kid with a new toy and it will be fun to see how they change as a band once this new coat of paint has dried. I heart this band and can’t say enough, but I have a word count and deadline so I must move on.

And move on I gladly will, because Bel Riose was up next. Brothers Geoff and Ryan Dolejsi are a 2 piece melodic punk-pop-rock powerhouse that in my opinion does not play often enough in this town, but those rare occasions are a hell of a treat because these dudes always tear the room to bits! They wasted no time in kicking the shit out of songs off of the last couple of albums, and playing a new song or two as well. They made small talk, they got sweaty and they threw screaming hot sound around the room. There is something about Bel Rioses music, especially in the live setting, that is beyond compare. It’s like they play at a frequency and with such power that it registers in the ears and through the body as white light. Like little witch fingers made of hot silver that scrape your eardrums and tap on your spine, filling you with excitement because you’re bearing witness to a certain alchemy. White light? What the hell is this guy talking about?? Well, I guess you’ll have to wait until the next show, won’t you? In the meantime visit their myspace page and demand that they play your next birthday party. And also, make your way to the Yale on Tuesday for a FREE show from Hawaiian Bibles as they record their next EP. And when they get world famous you can say you were there. Posted: Nov 24, 2008
In this Article Artist(s) Bel Riose, Hawaiian Bibles, Wilderness Years Resource(s): Chapel Arts, Nearly Famous Music Festival