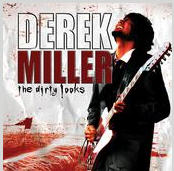 I try to balance the good and bad in my reviews, even if I'm not into the style. I don't like saying it, but the sophomore album from Ontario's Derek Miller thoroughly sucks. It sounds like a bar band failing miserably to channel George Thorogood, as per usual. Bad weekend-warrior riffs abound, alongside drinking, womanizing lyrics spewed by Miller's flavorless micro-Kroeger growl. "Girls" is so simple and obvious that Stephen Segal wouldn't go near it (and he wrote "Talk to My Ass"). How this House of Blues also-ran garnered a Juno nomination and praise from the likes of Robbie Robertson and Jim Jarmusch is beyond me. This is an album for 45-year-old mustached mechanics only. Sorry. Posted: May 6, 2008
In this Article Artist(s) Derek Miller