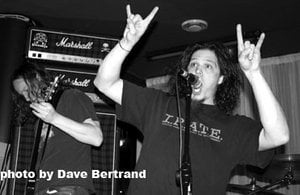 A pointless evening, overall; I came for Black Betty – Black Betty did not come! Ana was sick. They were replaced by the comparable, admirable Hezzakya, with huge double-stacks of amps-amps-amps (and the biggest kick-drum in the city), playing classic fuzzed-out heavy riffage in a showy metal stance. Half Sabbath, half heavy Kyuss (yes, I'm aware that's a slim margin). Singer Rob Krys nails the high-register Ozzy yodel to such a tee (he and Black Betty's Jonas are neck-in-neck) that he even stole the man's between-song banter, memorably: “Goodnight! I love you all!” - after song one. Fun times! As for Simian Rue...I wasn't aware that grown men still ape Marilyn Manson in 2008. Singer wore cargo pants, a ripped muscle shirt and aviator glasses, contorting awkwardly to invoke his inner torment, moaning in Manson's voice about circle jerks. Haircuts were uniformly ridiculous. Bass-player wore a Michael Myers / William Shatner mask – then took it off, to reveal a plain, suburban face. Guitarist Georin Costello looked like Living Colour and the New Power Generation met at the gay bar, with his risque T-shirt emblazoned with That's Mr. Fucking Faggot to You. Which is doubly insulting to homosexuals, as I later saw him make out with his girlfriend. What I would have done to break the drum machine and hear a riff! I skipped half the show and went to the Brickhouse to find my lost party. I was surrounded by hipsters and felt awkward. I saw the guy I don't like. Back to the Unicorn and Last Plague were doing their thing. Another pair of cargo pants, but they did solid mosh-metal, lots of breakdowns, Sepultura-meets-hardcore-meets-the-better-half-of-nu. Heath Fenton conveyed a similarly positive frontman vibe to the dude from Crackwhore & Abuse – a mean-looking, mean-spirited metalhead who is really just a big friendly lug. Nailed spot-on my fave indecipherable metal vocal mix, too: approximately 25% growl, 35% yell, and 40% shriek. I went home and ate an awesome bacon-and-egg sandwich. Posted: May 6, 2008
In this Article Artist(s) Last Plague, Hezzakya, Simian Rue Resource(s) Royal Unicorn Cabaret