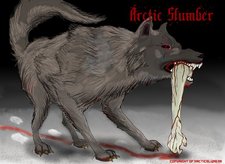 Aidan
krazy_aid__41@hotmail.com
Contact Info
Past Shows (2)
Arctic Slumber was created in 2007 as a heavy metal band. The name 'Arctic Slumber' refers to a time long ago, the Huronian ice age to be precise. Around 2.3 billion years ago during the early Proterozoic Eon, before any complex forms of life were existent in what is commonly known as the Arctic, the 4 members of Arctic Slumber were born out of thin air. They were born 17 years before the ice age took over the Earth. Some say their birth was divine - some say it was Satan's doing, but no one knows for sure. At 17 the four had raised themselves alone, working together to ensure their survival on the unmolested soil of the Earth so very long ago. When the boys were but 17 years old, the great Huronian ice age struck with no warning, and the boys were encased in solid ice freezing their bodies into an enormous glacier. They were in a frozen state in which their bodies could not age - an Arctic Slumber. The ice was so thick that it was only in the second millennium, with the help of Global Warming, that the ice finally melted. The 4 were free, and went on to create the greatest prog metal band known to mankind. ARCTIC SLUMBER! Victoria, BC metal - the band's main goal is to created outstanding progressive metal that minions all over the world can riot to.

It is now October 22nd, 8:57 pm Arctic Slumber has recently released their first ever demo containing 2 songs - written and recorded by by the band members themselves. The band is still in the process of writing new material, and there are many new songs to come! In the near future, Arctic Slumber will be booking gigs, and selling the demo at a very reasonable price which includes new band artwork drawn by Sebastian Stander and edited by Liam Henderson.

The band consists of the 4 original members; Adam writes a good portion of the music, supplies the band with lead vocals, and did a great deal of work in producing the demo tracks. Aidan had jammed with the band in a variety of positions throughout high school, but recently settled for the position as bassist & vocalist in the band. Zach lays down many riffs of his own originality. Matthias sweats over extremely complicated beats envisioned by Adam. All four members put their heads together in coming up with conceptual, and thought provoking lyrics for our music.

Arctic Slumber is looking forward to writing many more music, to produce a full length album in the near future, and making it possible for many more fans to enjoy the originality, and groove to our music.

-Aidan Doyle
No audio samples have been linked to this profile.

Status: Unknown
we are writing songs and looking for shows - Last confirmed Nov. 29, 2009
Submit info on this band to our admins