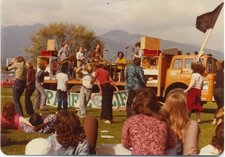 Alan Zisman
alan@zisman.ca
Contact Info
Vancouver’s Ad Hoc band was formed to play a dance celebrating International Women’s Day, 1978. By the time it disbanded at the end of 1982, it had played at nearly 100 events - dances, rallies, and more - for groups working for social change, raising spirits and nearly $100,000 in the process.
No audio samples have been linked to this profile.

Status: Broken Up
- Last confirmed Feb. 5, 2012
Submit info on this band to our admins