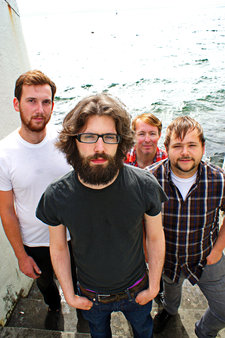 Acres of Lions is a pop-rock band based in Victoria, BC. Their music is lyrically-driven and influenced by early 90's emo bands such as The Get Up Kids and Jimmy Eat World.

2011 marks the second year in which Acres of Lions has been selected by Music BC as one of the 'Top 20 Bands in BC', as part of the Peak Performance Project. 2011 also marks the release of the band's sophomore album, Collections.

Collections features ten brand new tracks that take the band's sound in a more pop-influenced direction. The first single, "Reaction", was mixed by legendary engineer Mike Fraser and has been added to the playlist of several radio stations across Western Canada.

Acres of Lions has already received critical acclaim with their debut album Working...

"This is definitely a band to keep on the radar!" - Exclaim! Magazine

"...they have set about becoming the West Coast's answer to Sloan."
- FFWD

Other highlights include music placements on television programs Degrassi and Majority Rules; performances at CMW in 2009 and 2011, JunoFest 2009 and BreakOut West 2010; charting on the National Campus Chart; and scoring a shootout goal to assist Jim Cuddy and the "Rockers" win the 2009 JunoCup. Members of Acres of Lions have also toured with Florida's Against Me! and Toronto's TheSet.

Following up on their 150+ tour dates in support of their debut, Acres of Lions will be touring throughout Canada this November supporting Ten Second Epic as well as making an appearance at the Halifax Pop Explosion this October.

For more information on Acres of Lions, Collections and a complete list of tour dates, please visit www.acresoflions.com.
No audio samples have been linked to this profile.

Status: Available for Shows/Gigs
- Last confirmed Jan. 2, 2015
Submit info on this band to our admins